December 08, 2022
Home Uncategorized Pilgrims to have mammoth relief in Haj this year 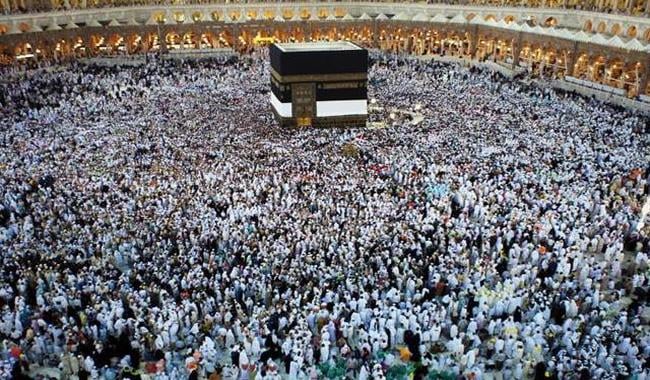 ISLAMABAD: The government is all set to adopt the open sky policy for Haj 2017 in order to provide mammoth solace to the pilgrims in airlines rates.
Apart from it, a package of new more facilities to be available to pilgrims this year such as tracking facility to trace the lost ones and booking of the luggage of Hajis from the accommodation site by the concerned airlines, the minister told The News here on Thursday in an exclusive interview.
“In addition, the government will also take a revolutionary step under which those who are to perform Haj through private companies this calendar year, will also not be able to carry out the grand religious exercise to perform the same for 5 years period ensuring the opportunity to new entrants for Haj every year.”
“Those who perform Haj through government scheme have already been exposed to the ban for five years which is effective for many years but the pilgrims are seen going for next haj within five years limit through the private sector depriving the people who want to perform their first ever Haj.”
Earlier the private sector companies were entitled to send those who have already performed Haj, but under new scenario they will not be able to send those who have already performed the grand duty for five years. This will give maximum room to the new entrants for Haj as the Saudi government extends the quota for Haj to every country which is obviously limited and that limit no country can exceed. The ban for five years for those who have performed Haj will ensure, every year new 179,210 people from Pakistan will perform Haj.
There are 742 private sector companies who send groups for Haj. The ministry strictly monitors their operations and in case any pilgrim come up with complaint, he is not only compensated, but the concerned private company some tines face blacklisting, fine, reduction in allocation quota depending upon the size of the negligence.
“Though we want 10 year ban for the one who has performed Haj, but the top decision makers will not agree to it,” the minister preempted saying, the five year ban , however, will be enough for ensuring the new entrants to get the opportunity for performing Haj.
The confident minister said that open sky policy will provide huge relief by about 50,000 per person in flight charges, as last year PIA had charged Rs92,000 as flight charges per person.
“And for Haj 2017, we fear more surge in PIA rates which is why we are going to adopt the open sky policy under which all the eminent airlines including indigenous and foreign airlines will be invited to come forwards and give the competitive rates for intended pilgrims,” Mr Yousaf disclosed.
The ministry has extended to PIA the offer of commuting one million Pakistani pilgrims for the whole year who keep performing Umra in addition to Haj, but at the flight rate of Rs50,000 per person, but the flag carrier is not inclined to do so, rather it is adamant to charge close to Rs100,000 per person which is why the Haj becomes very costly. “Once the flight charges are finalised through open sky policy, then the government will be in a position to announce the package for Hajis under government scheme which will be based on balloting, not under first come first served basis.”
Highlighting the tracking system facility to be introduced during the coming Haj, the minister said that every pilgrim will be wearing a kind of bracelet containing the tracking facility. Under the said facility there will also be an alarm system which will start working and warn the pilgrims that there is the fear of stampede and suffocation because of convergence of Hajis ahead.
In addition, Pilgrims can also use the alarm systemwhen they either feel that they are lost or they feel that they are not well. All the pilgrims will also be provided SIM cards which are to be the part of the package. The Wi-Fi facility we are already providing in the four or five star hotels.
In Muzdulfa, Mina and Arafat, the pilgrims will now be provided food free of cost for three times a day including breakfast. More importantly, Pakistani pilgrims will be provided latest and brand new transport with modern facilities from airport to the accommodation sites.
This minister said that this time from the accommodation site, the luggage of the pilgrims will be booked by the concerned airlines to avoid the hassle at the airport. Now the Hajis will only get boarding cards at the airport.
Coming to the private companies who operate for Umra operations, the minister said that the ministry is going to regulate them to this effect a bill has been placed with the name of Haj-Umra Act. Senate has passed it and National Assembly will take its next session and will Insha’Allah be approved and became act. Earlier the Umra operations were devolved to provincial governments under tourism. Now the government has decided to regulate them under parliament Act.
Under the Act, private companies will have to get the approval of the packages they offer to those who want to perform Umra. They will also have to submit the service providing agreement. In case of breach of the agreement and excess to any Umra pilgrim, the said company will be taken to task.
Federal Minister for religious affairs and Inter-faith harmony Sardar Muhammad Yousaf says five year ban is on cards on those who have performed Hajj through private companies; Reveals govt will adopt the open sky policy for Hajj to provide solace to the pilgrims in airlines rates; Also unfolds tracking facility to trace the lost ones and booking of the luggage of Hajjis from the accommodation site by the concerned airlines will also be available; Discloses that private companies operating for Umra will be regulated by the religious ministry.
Source: The News International