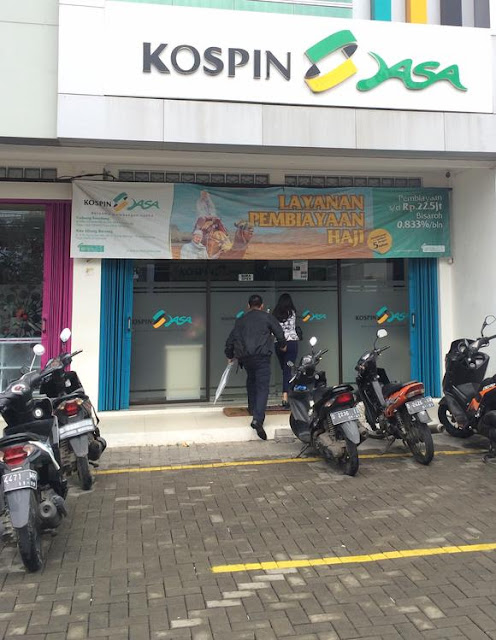 Many Indonesian financial institutions, like savings and loan cooperative Kospin Jasa in Bandung, promote financial services for Muslims preparing for the hajj pilgrimage. (Photo by Ardi Wirdana)
When former World Bank chief operating officer Sri Mulyani Indrawati was appointed Indonesia’s finance minister in July 2016 she wasted little time making clear that the government did not have enough money to execute its ambitious infrastructure plans. Other sources of funding were urgently needed, she stressed.
Following a disappointing tax amnesty program, and amid slow progress on forging public private partnerships, the government is now eyeing the country’s hajj (Muslim pilgrimage) fund as a potential source of infrastructure finance — a move supported by many, but strongly opposed by Islamist lawmakers.
The hajj fund comprises deposits made by millions of Muslims wanting to go on religious pilgrimage to Mecca, Saudi Arabia. They are usually put on a five to 20-year waiting list after making a down payment of 25 million rupiah ($1,900).
The hajj fund, which government estimates put at more than 70 trillion rupiah, is managed by the Religious Affairs Ministry, which uses the money to purchase government sukuk (Islamic bonds) and other government bonds. It also places some of the cash in time deposits.
The National Development Planning Agency, known as Bappenas, proposed in January that the Finance Ministry should use the proceeds of sukuk sales to the hajj fund to finance infrastructure projects, or channel the funds toward infrastructure spending in some other way.
“Now we have what is called sukuk-based projects. The sukuk can be raised from hajj funds, so it is indirect [financing]. It can also be [directly financed] from the hajj funds, but there must be an institution for it first. It can be used to finance infrastructure projects,” Bappenas head Bambang Brodjonegoro told local media.
The idea of using the hajj fund to finance infrastructure projects dates back several years. It was almost implemented in 2014, but the plan was stopped in its tracks when then Religious Affairs Minister Suryadharma Ali was accused of corruption and mishandling the hajj fund. He was found guilty of enabling people such as relatives and staff members to go on hajj for free.
Perfect match
Eko Listianto, an economist at the Institute for Development of Economics and Finance, a private think tank, said that controversy is now over, opening the way for the use of the hajj fund as an alternative source of funding for infrastructure projects.
“It’s better than just putting the money away somewhere, which would not benefit the growth of the economy. It’s a good thing as long as it is managed professionally and the projects are carefully selected,” he said. Eko argued that the long-term nature of the hajj fund deposits makes them a perfect match for infrastructure funding, which requires a long timescale.
Courtesy: Asian Review
Global

A MUST READ:  Emotional Hajj Story that may make you Cry

A MUST READ:  Emotional Hajj Story that may make you Cry

Comments Off on Plan to tap hajj fund for infrastructure challenged