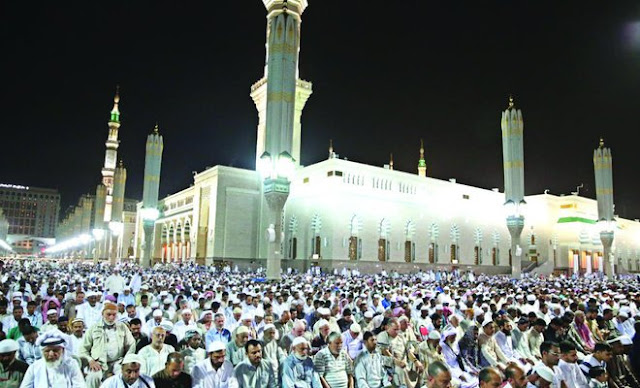 Thousands of Muslim worshippers perform the first Taraweeh prayer of Ramadan at the Prophet Mosque in Madinah on Friday. (SPA)
Madinah Gov. Prince Faisal bin Salman gave instructions that pilgrims and visitors at the Prophet’s Mosque be given assistance and provided all possible services.

These include mattresses placed in the interior corridors and on the roof of the Prophet’s Mosque, drinking water and provision of all the items needed by worshippers around the clock.
Cleaning work at the mosque will also be performed more often, especially after the Maghreb prayer, and worshippers will be guided by ushers to the gates and in the squares adjacent to the mosque.

Security at the Prophet’s Mosque was also enhanced in order to maintain order, guide worshippers and provide assistance if needed.

At the same time, more officers have been assigned to guide circulation on the roads leading to the Prophet’s Mosque, thus helping alleviate traffic congestion and easing the flow of vehicles on the main roads, and to prevent parking in the central region.

Security patrols are deployed in locations close to the Prophet’s Mosque to maintain security and provide assistance to those who need it, as are mobile Red Crescent Authority emergency teams to assist and transport emergency cases to the Madinah crisis and emergency management center, equipped to offer health care.

In an another development, pilgrims and visitors broke the fast on the first day of Ramadan at the Prophet’s Mosque.

On the first day of Ramadan, the people of Madinah perform afternoon prayer at the Prophet’s Mosque and after praying, partake in the breakfast, which contains different kinds of food and beverage, including dates, juice, water, milk, different fruit, meat and rice.
The rich table never fails to impress pilgrims and visitors.

On the other hand, many people contribute to the preparation of the Ramadan banquets, competing to give the best in thanks to Allah Almighty.
The sight of all the fasting people sitting side by side at the tables in and outside the mosque for iftar, of all nationalities and colors, united by piety in great Islamic unity is a fine image of cohesion, faith in this great religion, humility, tranquility and peace of mind
Featured

The Prophet’s Mosque library in Madina, affiliated with the General Presidency for the…