How will Ramadan in the kingdom be different this year as the coronavirus pandemic continues to rage?

The seasonal maintenance of the Kiswa (the covering of the Kaaba, the holiest site in Islam) began on Sunday, in preparation for the month of Ramadan.

Amid a pandemic, and as the number of coronavirus cases surge in the kingdom, the Saudi government has announced new regulations for the holy month, set to begin around April 12.

Pilgrims undertaking Umrah during Ramadan must be vaccinated against the coronavirus or otherwise immune, according to the Ministry of Hajj and Umrah.

The ministry issued a circular last week that requires all those working in the Hajj and Umrah industry to vaccinate all of their staff before April 12 or provide negative PCR tests every two weeks.

Here’s everything you need to know about Ramadan 2021 in Saudi Arabia: 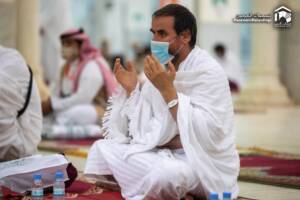 When does Ramadan begin?

The International Astronomy Centre estimates the beginning of Ramadan is likely to be April 13, but this could change according to moon sightings.

Every year, a moon-sighting committee – a group of astronomers, court officials and advisers from the country’s Islamic authority – typically convenes after maghrib, or sunset, prayers on the 29th day of Islamic month of Sha’ban to look for the new crescent moon. If spotted, Ramadan begins the following day.

Otherwise, Sha’ban will last 30 days and Ramadan will begin thereafter.

What are the rules at the holy cities of Makkah and Madinah?

King Salman approved that tarawih prayers be shortened from 20 rakaat (salutations) to 10, in addition to maintaining restrictions on the number of worshippers in the holy mosques in Makkah and Madinah.

Social distancing and wearing of masks will be mandatory for all visitors.

Sheikh Abdul Rahman Al Sudais, head of the Presidency for the Affairs of the Two Holy Mosques said the practice of iftar spreads and performing itikaaf (a spiritual practice most commonly practised by Muslims by spending long hours at mosques) at both grand mosques in Makkah and Madinah will be suspended for the whole month.

Sheikh Al Sudais said the mataf (area for circumambulation around the Kaaba) will be designated for Umrah pilgrims only and there will be five designated areas inside the Grand Mosque and its eastern courtyard for performance of prayers.

Only those with a valid permit for performing Umrah or prayer at the grand mosque – issued through the government’s Eatmarna application – will be allowed to enter Makkah.

Will other mosques be open?

Mosques across the kingdom that follow Covid-19 safety procedures and health protocols will be allowed to remain open over the holy month, the authorities said.

Worshippers are asked to maintain social distancing and wear masks. No mosques will be allowed to host iftar or suhoor and people will not be able to perform I’tikaf, the process of staying in the mosque for a period of days.

Friday sermons have been cut down to 10 minutes. Worshippers must bring their own prayer mat and Quran and remain physically distant from others.

There will be no iftar tents or banquets outside mosques, or elsewhere.

Public gatherings outside mosques are not allowed.

What will be unaffected by the pandemic?

This year, fewer volunteers will be allowed on the streets due to the pandemic, and charity organisations have already made arrangements to get food baskets and necessities delivered to poor neighbourhoods before and during Ramadan.

Streets and homes will still be decorated with festive and colourful lights and Ramadan motifs.

Will restaurants be open for Ramadan? Will they still deliver?

Buffets in restaurants and hotels have been banned across Saudi Arabia to restrict public gatherings and to curb further spread of the virus.

Supermarkets, pharmacies and businesses will remain open throughout the day and restaurants will open for delivery only at a later time – usually from 4pm to 2am.

What are the working hours during Ramadan?

According to new directives from the Ministry of Human Resources, the official number of working hours will not exceed five a day, starting at 10am to 3pm. The number of employees working remotely during Ramadan should not exceed 25 per cent of the total staff.

Priority will be given to the most vulnerable while the selection of employees who will work remotely will be in accordance with the Saudi Centre for Disease Prevention and Control .

Flexible working hours will be divided among three shifts, with an hour’s gap between each. The practice of clocking-in using fingerprints to register an employee’s attendance remains suspended.

What are school hours during Ramadan?

School hours will likely be reduced for the duration of Ramadan but these will be announced closer to the time. Public holidays start earlier for kindergarten and by April 30 at the latest for secondary-school students.