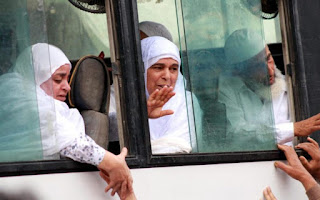 A record 2,340 Indian Muslim women aged above 45 years will embark on the Hajj later this year without a male guardian even as the federal government is busy clearing the decks to ensure their safety during the annual pilgrimage in Saudi Arabia.
The Hajj 2019, scheduled in August, will witness a sharp increase in the number of pious women undertaking the journey unaccompanied by a male relative compared to last year when it was allowed for the first time.
The federal government allowed 1,308 women to perform Hajj without a mehram (a person with whom marriage is unlawful).
While the southern state of Kerala accounts for 85 percent of these independent women, not a single woman from India’s only Muslim-majority state of Jammu & Kashmir has opted for the no-mehramcategory.
According to Minority Affairs Minister, Mukhtar Abbas Naqvi, about 100 women are being appointed for deputation to the consulate general of India in Jeddah to work as Hajj coordinators, officers and assistants.
They will extend helping hands to these women, and around 80,000 other women accompanied by family members.
For the past five years, the number of women going with mehrams and other members of the family has been around 45 percent, rising to 47 percent in 2018 and 48 percent this year.
Landmark decision
In 2014, Saudi Arabia allowed women over the age of 45 to travel together in groups without a male relative, though only after submitting a notarized no-objection letter from their husband, son or brother.
In 2017, Indian Prime Minister Narendra Modi and leaders of his Hindu-nationalist Bhartiya Janata Party (BJP) took credit for a “landmark decision” although rules governing the grant of Hajj visas for women are the prerogative of Saudi Arabia.
Among the many reasons, besides removal of subsidy, cited for the growing number of women undertaking Hajj in groups of four, sans a male kin, is the certainty of selection due to their exemption from the lottery system.
Woman assistants
On-the-spot availability of lady assistants, comfort of the three other group members, removal of middlemen, transparency in the application process due to digitalization and freedom to choose the embarkation point have all egged on more women to go solo.
“A majority of no-mehram women are from Kerala because they enjoy greater sense of independence and also because husbands of many of them work in Gulf countries,” points out senior journalist Hussain Ahmad.
The Modi administration, however, claims that the drastic cut in the goods and services tax (GST) on the Hajj pilgrimage from 18 percent to just 5 percent has made a lot of difference.
If minister Naqvi is to be believed, the sharp reduction in GST will not only ensure saving of Rs 1.13 billion by pilgrims but also ensure a significant decrease in airfares from the 11 selected embarkation points.
Private operators
Saudi Arabia allocates a quota to each country on the basis of one pilgrim for every 1,000 of the Muslim population of the country.
The Haj Committee of India has distributed its total quota of 175,025 seats to pilgrims going to Hajj through it – 125,025 through the Hajj Committee and the remaining 50,000 via private tour operators.
The federal Ministry of External Affairs coordinates the Hajj arrangements, in consultation with Hajj Committee and the Consulate General of India in Jeddah. The ministry also sends some 500 officials on deputation every year that includes coordinators, Hajj officers, assistants, doctors and para-medical staff for rendering assistance to the pilgrims.
The Consulate arranges for temporary tents in Mina, sets up dispensaries, branch Hajj offices, arranges ambulances and other local transport for the pilgrims. The ministry supplies medicines and medical equipment to the Consulate to meet the requirements of the pilgrims.
According to the Hajj Action Plan 2019, the first outbound flight for this year’s pilgrimage season will depart from India on July 1 while the last outbound flight will be on August 3. The first inbound Hajj flight from Saudi Arabia to India will be on August 14.