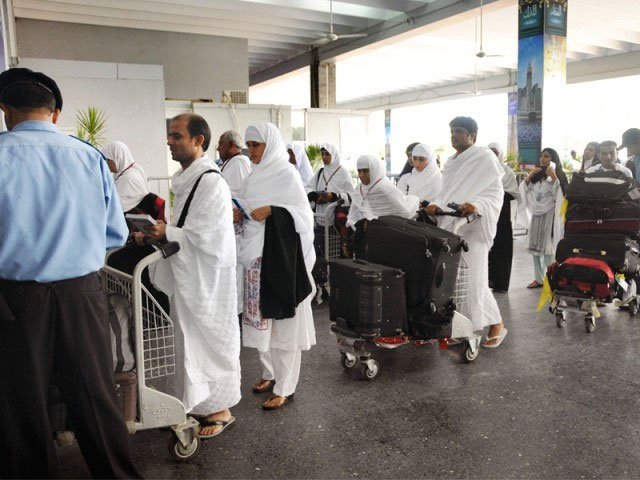 Pakistan Pilgrims undergoing screening at King Abdulaziz International in Jedda, Airport in KSA
Pakistan Today
After receiving complaints against the Umrah operators from the pilgrims regarding non-provision of agreed facilities/packages to them, the Ministry of Religious Affairs and Interfaith Harmony has drafted Hajj and Umrah Services Management Bill 2017 to take action against the defaulters.
Official documents available with Pakistan Today disclosed that Ministry of Religious Affairs has so far received an alarming number of complaints from pilgrims regarding non-provision of agreed facilities/packages to them. However, the ministry was unable to take strict action against the defaulters mainly because it lacked legal cover in this regard.
“Due to a lack of legal cover to take punitive action against the defaulters, this ministry has drafted Hajj and Umrah Services Management Bill 2017,” documents said.
The documents further revealed that cabinet and NA Standing Committee on Religious Affairs have accorded their approval to the bill. And, after that, the said bill was sent to the Law Division for vetting. However, the division in its response has raised certain observations.
Official sources at Religious Affairs Ministry told this scribe that Law and Justice Division has raised observations regarding the establishment of two separate funds namely to pilgrim welfare fund and Umrah welfare fund through Hajj and Umrah Services.
Management Bill 2017. They said Religious Affairs Ministry in order to remove Law and Justice Division’s observation has forwarded the draft bill to the Finance Division on February 13, 2017, and sought Finance Division’s view/comments on the said Hajj and Umrah Services Management Bill 2017. “Finance Division’s reply on the subject matter is still awaited,” said officials.
They said it is believed that facilities to the pilgrims will be ensured by the ministry as per the newly drafted bill.