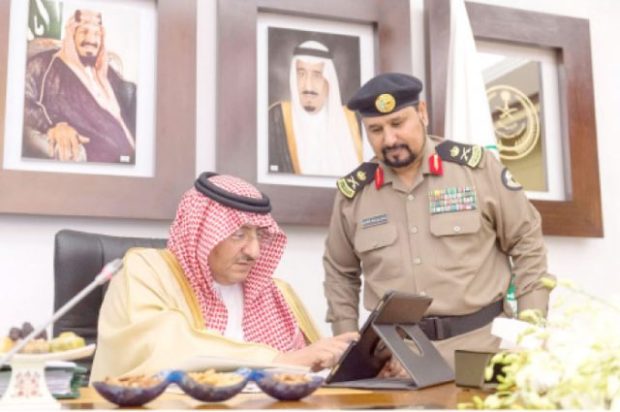 Saudi Arabia has launched “A Nation Without Violations” campaign to give residency and labor law violators the chance to leave the country without having to pay penalties.

The campaign was approved by Custodian of the Two Holy Mosques King Salman bin Abdulaziz.
Crown Prince Mohammed bin Nayef, deputy prime minister and minister of interior, urged violators to take advantage of the 90-day grace period starting on March 29, 2017.
During the ceremony at the ministry of interior, Prince Mohammed directed authorities to facilitate the procedures of people who seek to leave the country within the specified period and relieve them from all sanctions.
The ceremony was attended by: Prince Abdulaziz bin Saud bin Naif bin Abdulaziz, Advisor to the Minister of Interior, Minister of Labor and Social Development Ali al-Ghafis, Undersecretary of the Saudi Ministry of Interior Ahmed al-Salem, Assistant Minister of Interior for Operations Affairs Brigade Saeed al-Qahtani, Assistant Minister of Finance Muhammad al-Mazeed, director of Public Security Othman al-Mohrej, and other officials.
On Sunday, Maj-Gen Mansour al-Turki, security spokesman of the Ministry of Interior held a press conference and urged violators of the residency, labor and border security regulations to seize the opportunity to settle their status and be exempted of fines and penalties.
Turki said “A Nation Without Violations” is an extension of the campaign launched three years ago with more than 2.5 million violators departing under the program. He said the new campaign is extensive and includes all 19 governmental authorities. This means that there will be close and continuous follow up of people working in all activities and all establishments that are supervised by government authorities.
“Fingerprints will not be taken, the way it is taken from those who are deported and are not allowed to work in the Kingdom again, thus allowing them another chance to come to the Kingdom,” he explained.
He said the campaign is aimed at all expatriates, who do not hold valid iqamas or identification papers in the Kingdom and have the residency or labor regulation or both, or those who have entered the Kingdom on Hajj or Umrah visa or transit and have not taken the initiative to depart after the expiry of their visas. This applies also to those who have violated the Hajj directives by performing Hajj without a Hajj permit.
Turki told the press that all embassies in the Kingdom have been informed about the campaign and all cases of undocumented persons had been arranged with concerned embassies. He stressed that such cases must travel to their respective countries through legal means.
As regards the procedures for settling the violations, he urged the violators to take the first step by clearing all personal rights owed to them or to others before starting departure procedures.
Turki, however, did point out that some violators may be linked to security violations, not limited to committing terrorist crimes.
Spokesman of the Ministry of Labor and Social Development Khalid Abo al-Kheil said that there have been about 8000 violation report and 800 inspectors are investigating the cases.
Spokesperson of the directorate General of the Border Guard Saher al-Harbi said that the border guard is equipped against any infiltrator trying to enter the country, adding that thousands are being deported every month.
Spokesperson of the directorate of Passports Department Talal Shalhoub said that the department is ready to receive all violators to perform all needed procedures. He also said that the ministry of interior has allowed Syrian and Yemeni civilians to remain in the Kingdom until the crises are over in their respective countries.
Source: Al-Awsat