The Saudi Arabian ambassador to Nigeria, Adnan Mahmoud Bostaji has announced that the Kingdom has been offering 424 scholarship slots to Nigerians each year.

Mr Bostaji announced this on Tuesday while giving a brief remark at a conference on free and compulsory education in Kano state.

The conference is organised by the state government as part of measures to curb “Almajiri Syndrome” in the state.

The Ambassador told the gathering that “ I have the pleasure to announce that the Government of the Kingdom of Saudi Arabia offers Four Hundred and Twenty-Four (424) university scholarship slots to Nigerian students every year, from different states of the federation and in various academic fields, for undergraduate and graduate students”.

Some of the beneficiaries of the Scholarship offered by Saudi Arabia

While expressing his delight at attending the event, the Saudi Ambassador said the conference is “necessary and important because it will have a positive impact, not only on the good people of Kano State but also on all the people of Nigeria”.

He also said the conference will help in putting an end to the negative behaviour that comes from youth in the society because of lack of education. 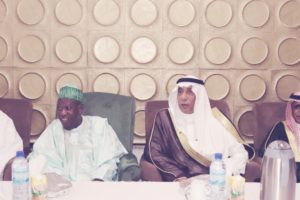 Mr Bostaji with Governor Abdullahi Ganduje  during the event

“It is also my pleasure to commend the Kano State Government’s initiative of re-modelling the traditional “Al-MAJIRI” System of Education,” he said.

He also said “ I wish this conference every success in its work, and that it comes out with the expected results. I also congratulate the Government of Kano State for this great work”.