Saudi authorities are planning to implement a digital Haj this year relying more on technology and reducing human resources in managing crowds and organising the pilgrimage, local media reported.

Robots will provide pilgrims with fatwas (edicts), guidance, as well as the electronic Qur’an, and the movement of pilgrims will be linked to the computer.

Timings for all Haj rituals will be set accurately for every pilgrim from their arrival in Saudi Arabia until they return home safely.

During Haj, pilgrims join processions of Muslims from around the globe, who simultaneously converge on Mecca for the week of the Haj, and perform a series of rituals: Each pilgrim walks counter-clockwise seven times around the Kaaba (a cube-shaped structure and the direction of prayer for Muslims), trots (walks briskly) back and forth between the hills of Safa and Marwah seven times, then drinks from the Zamzam well, goes to the plains of Mount Arafat to stand in vigil, spends a night in the plain of Muzdalifa, and performs symbolic stoning of the devil by throwing stones at three pillars. After the sacrifice of an animal (can be accomplished by using a voucher), the pilgrims then are required to either shave or trim their heads (male) or trim the ends of their hair (female). 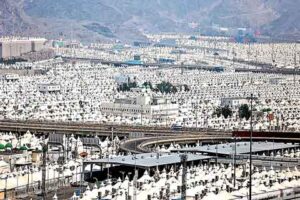 A celebration of the three-day Eid Al Adha follows thereafter.

Last month, Saudi Arabia announced the resumption of the Haj this year for both Saudi and foreign pilgrims through the Saudi Ministry of Haj and Umrah. The ministry also said that stringent security and regulatory measures would be in place to ensure the safety and health of pilgrims, with the specifics of these safety measures to be revealed at a later date.

The Saudi authorities have stressed that they’re keen to enable Muslims around the world to perform the Haj rituals. However, the safety of pilgrims would take precedent.