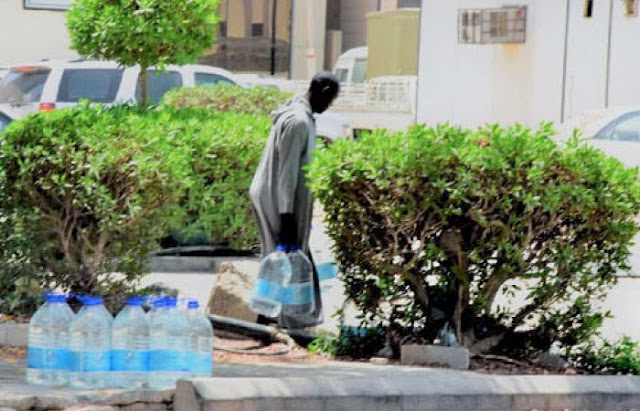 MANY people get surprised when the prices of Zamzam bottles suddenly increase in the holy month of Ramadan to as high as SR40, which are sold for SR5 in off-seasons.
These bottles are filled at King Abdullah Zamzam Water Distribution Center in Makkah for a nominal fee.
The reason behind the increase in prices is that some people buy large amounts of Zamzam bottles a few months before Ramadan and sell them in the holy month when the demand is very high.
The vendors usually buy them from ordinary people who go and fill Zamzam at the distribution center by persuading them to sell at a premium of one or two riyals per bottle.
These vendors take advantage of the fact that the majority of people in Makkah love to break their fast with Zamzam in Ramadan and do not mind paying SR20 or even SR40 for a 10-liter bottle.
Saudi Gazette visited the Zamzam distribution center and talked to the people to shed more light on these issues.
One man said he bought 20 Zamzam bottles at the center. As he was preparing to leave the parking area after putting the bottles in his car’s trunk, he was approached by a few African men. They asked him how many bottles he had and whether he was willing to sell them at a higher price. One of them offered him SR6 a bottle while another offered him SR8.
“I agreed to sell them at SR9 a bottle and got SR180 for 20 bottles for which I had paid SR100 at the factory. They asked me to move my car out of the parking area so that the security guards at the center would not see them buying Zamzam from me. I gave them the bottles and they gave me the money,” he said.
This reporter posed as someone who wanted to buy a large number of Zamzam bottles and waited outside the parking area. He waved down a pickup truck that was carrying around 20 bottles and asked the driver if he was interested in selling them.
The driver agreed and even said he was ready to provide a larger number of Zamzam bottles in a short time. When asked how he was going to do that, he said he and a number of his relatives buy large numbers of Zamzam bottles several months before Ramadan and store them at their houses to sell them when Ramadan is around the corner. They earn a lot of money from this activity.
Many citizens told Saudi Gazette that the authorities have not taken any serious measures to stop these illegal activities. They hope that those who engage in selling Zamzam water at a premium, whether they are Saudis or expatriate workers, should stop these activities because they pose a public danger as they might be storing Zamzam in their houses in inappropriate conditions and some of them might be exposing the bottles to sunlight.
Saudi Gazette