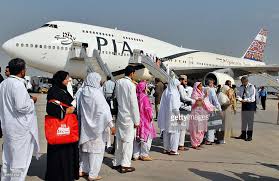 The Senate’s Standing Committee on Religious Affairs and Interfaith Harmony in Pakistan on Monday expressed displeasure with the Ministry of Religious Affairs for ignoring official instructions over the provision of quota to private hajj operators.
The meeting of the standing committee was held under the chairmanship of Hafiz Abdul Kareem.
The committee unanimously decided to reject the list of 29 new companies given the quota by the ministry. It suggested that Ministry of Religious Affairs should have 40 percent quota for the private sector — 71,684 pilgrims. Out of which, new tour operators should not be given a quota of more than 50 pilgrims each.
The committee said that the ministry had ignored the recommendations of the high-powered committee constituted in this regard by the prime minister. The committee had consisted of chairman of the Senate Committee on Religious Affairs, Committee of the National Assembly on Religious Affairs, the federal minister for religious affairs and the state minister for religious affairs.
MNA Ali Muhammad Khan said that smaller provinces such as Balochistan should not be ignored in fixing the quota of pilgrims.
The committee confirmed the minutes of the previous meeting.
The chairman informed the committee members that the government had 60 percent of the quota and private tour operators had 40 percent.
According to the direction of Supreme Court of Pakistan, the quota of pilgrims should be given to new tour operators who had already given applications. Some of them had appealed to the SC after they were deprived of their hajj quota.
The Ministry of Religious Affairs joint secretary told the committee that 2 percent quota was provided by the Hajj Policy Formulation Committee, constituted by the Supreme Court of Pakistan, to 29 new companies. The committee will now meet on July 10.
The meeting was attended by Malik Abdul Ghafar Dogar, Syed Imran Ahmed Shah, Bhawan Das, Kiran Imran Dar, Ramesh Lal, Ali Muhammad Khan, Lal Chand Malhi, Muhammad Kamal, Shahida Akhtar Ali, Sahibzada Muhammad Yaqub, Shagufta Jumani, Maulvi Agha Muhammad and the state minister for Religious Affairs and Inter-faith Harmony.
Daily Times, July 4th , 2017.