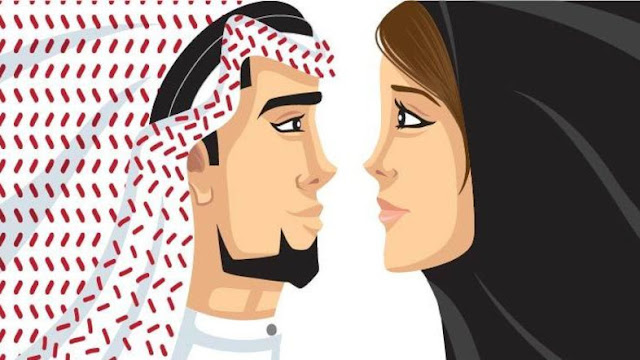 Arab men are often requested to pay expensive dowries when they decide to get married.
However, many fathers of brides in Saudi Arabia have opted for simple demands as they believe that the principle of morality and trust must come first.
A while ago, a video posted on social media platforms showed a Saudi father in Jazan telling a young man who proposed to marry his daughter that the dowry is memorizing the Quran. The 26-year-old groom complied and memorized the Quran, and then married the girl.

In Abha in the region of Asir, a father requested only 10 Saudi riyals as a dowry. He demanded that the amount be paid in the new Saudi currency. According to a source, the father asked for this small amount of money because he aims to break traditions, which often delay young people’s marriage because of typically expensive demands.

Also in Asir, in Tharban, a father married his daughter to a man for a dowry worth only 1 Saudi riyal as he believes that religion urges one to smooth out the process marriage.

Another Saudi father gave away his daughter without requesting a dowry and he only asked the groom to hold a dinner. The father also gave the newlyweds a villa as he said he does not want to be in debt when they begin their life together. Another Saudi father’s dowry request to his daughter’s groom was to memorize Surat al-Mulk, a passage from the Quran.

One of the strange dowry requests though came from a Saudi girl who asked the man who proposed to her to bring 300 spiny-tailed lizards. She also asked him to bring them on his own without anyone’s help. The groom managed to bring 100 lizards during three months. The girl said the aim of this request was to test how much the groom was attached to her. Apparently, the groom had a phobia from lizards but said he overcame it to meet her demand.

Another Saudi father believed a young man’s loyalty to his dad was the most precious dowry. The man had donated a part of his liver to his father, and when he decided to propose, his future father-in-law was impressed by his selfless act and agreed to marry him to his daughter without paying any dowry.