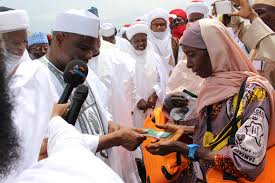 By Abubakar Muhammad
The Sokoto State Pilgrims Welfare Agency (PWA) has disqualified pilgrims that have attained 70 years and above, from performing the 2017 Hajj exercise.
The Director-General of the agency, Ibrahim Umar has disclosed while briefing journalists in Sokoto.
“All prospective pilgrims that have reached 70 years and above as well as women are disqualified from performing the hajj, just like any other pregnant women,” he said.
He lamented the activities of racketeering in allocation of seats in 23 local governments across the State.
He alleged that, some of the local governments had sold between five to six hajj seats to some ”special” individuals and middlemen, contrary to the warnings against doing so.
“We have set up a committee to go round the 23 local governments, with a view to fishing them out
“Afterwards, all those seats illegally sold would be revoked and returned to the agency for resale to other prospective pilgrims.,” he said.
The DG said the agency had allocated 4,571 seats at N1million each, to the 23 local governments of the state, while 500 seats were reserved at the agency for federal workers and residents from other states.
He said the agency is also set to remit over N 2.7 billion to the National Hajj Commission of Nigeria (NAHCON),being payment for 50 per cent of the 5,571 Hajj seats allocated to the state for the 2017 hajj exercise to meet up NAHCONs deadline.
“Only Gada, Wurno, Sokoto North, Shagari, Tambuwal and Illela LGAs had each paid 80% of their
allocated hajj seats.
“The rest were faltering between twenty to fifty per cent payment
rate and we have given them up to March 30, 2017, to complete the payment of their allocated hajj seats,” the DG said.
Mr. Umar however stated that, each of the prospective pilgrims must have a guarantor in the person of a civil servant on grade level 12 and above; a religious leader or any traditional ruler.
“We will then conduct interviews and a one-week training for them, after which they would be given certificates qualifying them to perform the forthcoming hajj.
“The agency had gotten all the necessary logistics support from the state government to conduct a
successful exercise, both in Nigeria and in Saudi Arabia” he added.