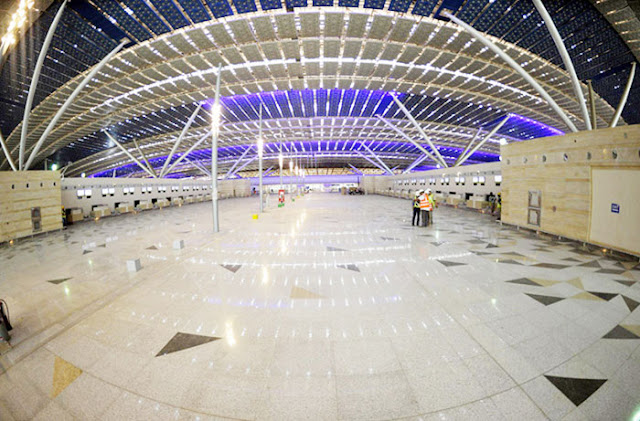 THE new King Abdulaziz International Airport (KAIA), a world-class iconic and high-tech gateway to the Two Holy Mosques, will start experimental operation in the beginning of next year.
The KAIA, one of the largest aviation hubs in the world, will be a smart, environment-friendly, unique landmark of the Arab and Islamic architecture.
Located 19 km north of Jeddah city, the airport boasts of having one of the tallest control towers in the world, with a height of 136 meters. In the first phase, the airport will handle 30 million passengers per annum, according to Ibrahim Mandoura, director general (planning and studies) of the General Authority of Civil Aviation (GACA). “With the completion of the second phase, the airport will be able to handle 55 million passengers, and 100 million following the third and final phase. So far 88 percent of the works have been completed and the airport would serve 36.5 percent of the total passengers using Saudi airports,” he said.
Mandoura said that as many as 21,000 engineers and workers belonging to 110 companies are racing against time to complete the first phase of the project, using 3,263 equipment. “The active involvement of Makkah Emirate, Ministry of Transport, and Jeddah Governorate in implementing giant projects such as Haramain Speed Rail, and flyovers connecting airport with main highways, has enabled GACA to go ahead vigorously with the completion works on a time-bound basis.
The SR27-billion project with world-class facilities will be one of the largest airports in the Middle East and Asia, connecting the West and East. It is expected to generate jobs for thousands of Saudis.
Mandoura said that GACA gave utmost care in preserving environment in all phases of designing and construction of the airport. The new KAIA will have highly advanced facilities in terms of passenger lounges, air traffic control towers and support services.
Spanning over an area of 810,000 sq. meters, the airport complex will have two new terminals for domestic and international passengers, allowing all airlines to operate under one roof. It includes passenger lounges, a new concourse building with 25 additional passenger bridges and connector buildings linking the terminals, air bridges and movable gates, apron and taxiway modifications and extensions, electrical and mechanical systems and extension.
A total of 27,987 sq. meter area has been earmarked for commercial investment purposes.
The terminal consists of 220 standard check-in counters for all airlines, 80 self-service machines for airlines, 56 Passport Control counters for departure and 72 counters for arrival, 117 passport self-service machines, 46 gates for domestic and international passengers, 94 aerobridges, 42 waiting lounges for international flights and 24 for domestic flights, four waiting lounges for senior citizens, five lounges for first class and business class passengers, and automatic train system for the transport of international passengers.
The gigantic public transport center is another major highlight of the new airport. The integrated center is situated between the airport terminal complex and multi-storied parking building. The terminal is linked with parking areas, Haramain station, metro station, taxi and bus stations.
The Haramain station can receive six trains from Makkah, Madinah and Rabigh at a time on an area spreading over 12,000 sq. meters. The parking facilities, include four-story building linked to the passenger terminal, temporary parking area for 8,200 vehicles, as well as parking areas for 48 buses, 651 limousines, 1,222 rent-a-cars, and 7,187 vehicles of the airport staff. The parking facilities are equipped with the smart guiding system to know the vacant spots. A massive 34 km long network of roads, 13 km long bridges and 2.5 km tunnels are part of the transport system.
There are green spaces within and around the airport terminal complex. A garden, on an area spreading 18,000 sq. meters inside the terminal, is another landmark, and the automatic train station is situated in the middle of it. There is a huge aquarium, with a height of 14 meters and capacity of one million liters of water, in the middle of the transport center.
A mosque with the capacity to hold 3,000 passengers, including 300 women, features the unique Arab and Islamic architectural designs. There is outside prayer area for another 1,500 people. Adjacent to the mosque, there is a huge garden facility with green spaces spreading over an area of 30,000 sq. meters with a water pool in the center and shaded parking area for over 500 vehicles. The airport also consists of environment-friendly waste water treatment facility, fuel storage field with eight tanks, energy saving lighting, and high tech fire extinguishing and rescue complex, in addition to health clinic, rest house, recreational area and playgrounds for children.
Saudi Gazette