“The Muslims use retirement money, pensions, take loans for this religious trip,” a CA based out of Bombay said.

This is the first time in independent India, that Hajj pilgrims are being expected to file returns on their religious visit to Mecca and Medina. Amidst major confusion several chartered accountants as well as the CEO of the Haj Committee of India have written to local politicians in several states as well as the Ministry of Minority Affairs for the last six months, but with the deadline fast approaching on 10 January, the central government is yet to clarify if the Hajjis will be granted exemption.

Zafaryab Jilani, All India Muslim Personal Law Board executive member and Lucknow-based advocate, told The Quint this has never happened in India. He said, “Never in the history of India, since 1947, has this happened and this should not happen. It is unnecessary. You have the provision in the law to bring notifications and keep this issue from arising, like done in the past by previous governments. Go ahead and take returns from those who are liable to pay income tax, why harassing crores of people?”

Dr Maqsood Ahmed Khan, Chief Executive Officer of the Haj Committee of India, said they are still expecting that the Hajjis will be exempted from fling their returns.(Photo: Wikimedia Commons)
Despite the deadline on their head, the Chief Executive Officer of the Haj Committee of India, Dr Maqsood Ahmed Khan, said they do not know what to tell the Hajjis, “As a consequence, we are not sure what to say to the pilgrims. We are getting calls but saying that it is all ambiguous right now. We are not telling them to file the returns or not file the returns. We are saying this is what the situation is and you can file the return if you want to.”

What is The Confusion?
In 2019, the Finance Act 2019 was amended to say that people who spend more than Rs 2 lakh for their foreign travel in the year 2019-2020, will have to compulsorily file tax returns, even if their income is below the exemption limit. Explaining how this impacts the Hajjis, 35-year-old Gulzar Karishma Malik, a practising chartered accountant based out of Hyderabad, said, “Every year lakhs of Muslims perform Hajj, which is one of the five pillars of Islam, where they end up spending more than Rs 2 lakh. This means that they will all have to file returns on their religious visit.” Karishma has given presentations regarding this to the Home Minister of Telangana Mahmood Ali, hoping it reaches the ears of the central government.

The confusion begins now: “Now the same amendment says that foreign travel to a neighbouring country like China, Pakistan etc have been exempted to file returns. This means that when Hindus take their yatras to the Mansarovar Lake in China or the Sikhs visit the gurudwaras in Punjab, they do not have to file returns despite how much they spend. This however does not cover the pilgrimage trips that Muslims take to Mecca and Medina in Saudi Arabia. So, they do not get any protection or relief as their pilgrimage is not to a neighbouring country,” Karishma added.

The last time such an amendment was made to the Finance Act was in 1997. Soon after the then Finance Minister P Chidambaram issued an exemption notification which said that Hajj pilgrims need not need to file returns. “We are not saying that no Muslim should file returns, we are only saying that Muslims who are going to Mecca and Medina, which is a pillar that Islam stands on, should not be made to compulsorily file return,” Abdul Hamid Bhati, a Mumbai-based chartered accountant who has been practising for forty years, explained.

This is Being Done to Harass Muslims, Jilani Says
Speaking about how those taking pilgrimages to neighbouring states, like China or Punjab, do not have to file returns, he said, “This is not justifiable. It is in the hands of the government to fix this. Most of the Muslims who go for pilgrimage often do it with money they have saved for all their lives, it is the home of Allah that a Muslim wants to visit. They use their retirement money, pensions, often take loans from others to make this trip overseas a reality for themselves. It is a religious pilgrimage, not a leisure trip. These are people who are farmers, labourers, and live in villages. They anyway do not make Rs 2.5 lakh a year to qualify as taxpayers,” Bhati said. Jilani added how about 75 percent of those who take the Hajj pilgrimage have never heard of Income Tax.

Pune-based advocate and activist Saleem Shaikh says this government imposition is arbitrary, he says,“When a visit to a gurudwara in Pakistan is exempted, then how can Hajj not be exempted? When a man goes to Hajj once a year, using all his life savings, why attack him? Go after the corporate houses, go after the big fish.”

Karishma is giving her presentation regarding the issue to the Home Minister of Telangana Mahmood Ali, hoping it reaches the ears of the central government.(Photo: The Quint)

“This government is doing this deliberately,” Jilani claims. “It is the government’s agenda to harass the Muslims and when the Muslims protest, the government’s number of votes increase. Some people, who are the constituency of the BJP are only happy when some such law is made that causes Muslims inconvenience. It is their psyche. The Muslims know it, so there is no use of any protest. Their votes will only increase. It is on the secular parties to raise this issue.” 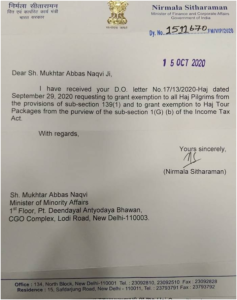 Karishma says the issue here is regarding respecting religious pilgrimage, “We are saying this is about respecting religious pilgrims, this is a pillar of Islam. Practically if you see most of the Hajjis are old, pensioners, widows, lots of people take loans and go as well. This is something one wants to do in their life once. People often sponsor the trip for others, this happens a lot. Some of the groups take a person along to cook and also a religious scholar who guides everyone on Hajj rituals. Such persons are sponsored by the group and they have never filed returns in their life.”

Why is There No Clarity Yet?
Now like Karishma and Bhati have tried, several presentations have been made to local politicians in several state governments for the last six months. After repeated appeals, a letter was also forwarded by the Minister of Minority Affairs Mukhtar Abbas Naqvi to Finance Minister Nirmala Sitharaman.

A letter on the Finance Minister’s letter head was shared with this reporter. The letter acknowledges Naqvi’s letter from 29 September. It reads: “I have received your DO letter dated September 29,2020 requesting to grant exemption to all Haj Pilgrims from the provisions of sub-section 139(1) and to grant exemption to Haj Tour Packages from the purview of Income Tax.”

“This happened in mid October. The deadline of December ended, now the second deadline of January 10 is also upon our head. When will we know for certain?” Bhati asks. Dr Maqsood Ahmed Khan said that he believes that an exemption for the Hajis will be allotted sooner or later, “It will come, we are hopeful. Conversation between the Ministry of Minority Affairs and the Ministry of Finance is ongoing,” Khan said, adding how lots of people do not know about this provision yet. “They do not have pan numbers, they do not have regular income, they do not have money. In a lot of these cases, they sell their land to go on Hajj.”

While clarity is awaited even though the deadline is practically here, several Hajjis are at the risk of being fined by the government. “They will start getting notices from the government, then there will be an interest and a penalty that they will have to pay. All this is wrong. When this is a pillar of Islam, why not give the exemption like we have been getting ever since the creation of India,” Bhati said.
THE QUINT

The superiority and rewards of the Jumu’ah prayer