June 06, 2022
Home Global The joy of breaking fast at the Holy Mosques 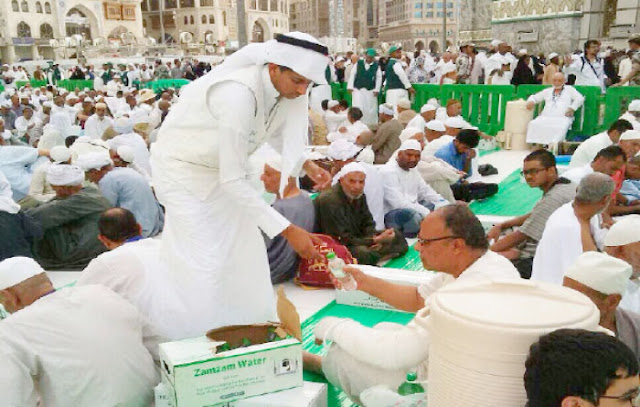 RAMADAN is a month of immense blessings and the community iftars at mosques and other public places is one of these blessings.
For believers around the world, the month of fasting simply doesn’t mean abstinence from food and drink from dawn to dust, but it is a unique experience where everyone displays a readiness for improvement in thought, word and deed.
It is a month when Muslims will never miss an opportunity to mend relations and build bonds of brotherhood with everyone. And this spirit of fraternity is all the more visible at the mass iftar gatherings and the most elaborate of these gatherings are in Makkah and Madinah where millions of Muslims from all over the world converge to spend the blessed month in an atmosphere of piety and virtue.
In one of the oft-quoted Ramadan-related hadiths, the Prophet (peace be upon) said, “The fasting person has two occasions for joy, one when he breaks his fast because of his breaking it and the other when he meets his Lord because of the reward for his fast.”
Indeed the iftar at the Prophet’s Mosque is a joyous experience for the hundreds of thousands of pilgrims and visitors who come to the city from all corners of the Islamic world. People of various nationalities, of different social strata and all walks of life sit together in unending rows inside the mosque and its courtyards to break their fast. Such social ambience and harmony cannot be witnessed anywhere else in the world barring the Grand Mosque in Makkah.
Every day in Ramadan, iftar meals are served to hundreds of thousands of pilgrims and visitors to the two holy mosques with the cooperation of charitable organizations as well as philanthropists.
Abdullah Al-Shamrani is in charge of organizing iftar meals at the Grand Mosque’s courtyards, an activity which is supervised by the Presidency of the Two Holy Mosques Affairs.
“We work nonstop to ensure that the iftar meals are served on time to Muslims who come from all parts of the world to perform Umrah in Makkah. All my colleagues are licensed by the Presidency of the Two Holy Mosques Affairs and follow strict criteria in organizing the meals. No leftovers are thrown away and are instead distributed among the poor and needy in Makkah,” Al-Shamrani said.
In the past, the iftars were not organized the way it is today and the meals were distributed in a haphazard manner, which led to crowding and many undesirable behaviors inside and outside the Grand Mosque. Today, the meals are distributed to tens of thousands of people in an organized manner and within a short time.
In the last ten days of Ramadan, half a million iftar meals are distributed daily inside the Grand Mosque alone. All matters related to iftar meal distribution are carried out like clockwork because the officials ensure that all people engaged in organizing the meals follow strict criteria set by the presidency to avoid any disorganization.
Abdulwahid Al-Hattab is an adviser at the agency in charge of Prophet’s Mosque’s Affairs.
He said people of Madinah are keen to donate money to provide iftar meals to Muslims who visit the Prophet’s Mosque in Ramadan.
The meals are organized inside the mosque and its courtyards and include dates, coffee, yoghurt and bread. The location of the iftar meals are chosen carefully in northern, eastern and western courtyards to ensure the smooth movement of worshippers and prevent crowding.
“Every day we serve over 100,000 iftar meals to visitors of the Prophet’s Mosque,” he said.
The agency for Prophet’s Mosque’s Affairs has recently introduced technology that allows the officials to directly monitor the quality of food served for iftar. The new service was launched under the supervision of Sheikh Abdulrahman Al-Sudais, head of the Presidency for the Affairs of the Two Holy Mosques.
Bishar Al-Ali, who is in charge of the iftar meal project inside the Grand Mosque, said: “The purpose of organizing such meals is to promote social solidarity among Muslims and enhance the culture of volunteering. We select volunteers carefully. Most of the meals are provided by well-known businessmen and charitable organizations in Makkah.”
Iftar meals should include dates, juices, coffee, water, yoghurt and bread.
A large number of young men volunteer to help with organizing the iftar meals. They attend training programs offered by the presidency for anyone willing to help organize the meals.
TRIBUNE
Hajj News