November 24, 2022
Home Global The story of Masjid Shajarah, the Masjid of the tree,

Masjid Shajarah (Arabic: مسجد الشجرة) means ‘Masjid of the tree’ and is located opposite Masjid al-Jinn. It marks the spot from where the Prophet (ﷺ) called a tree and it came to him. Note that this masjid is not to be confused with the masjid in Dhul Hulayfah which is sometimes referred to by the same name.

Umar (رضي الله عنه) reports that the Prophet (ﷺ) was onced at Hajoon when some of the Mushrikeen (disbelievers) rejected his invitation to #Islam. The Prophet (ﷺ) prayed, “O Allah! Show me such a sign after which I would have no concern for the rejection of the people.” 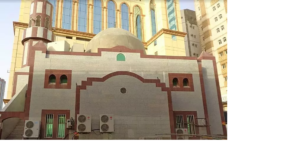 He was then told to call a nearby tree to him. When the Prophet (ﷺ) did so, the tree came to him and greeted him with Salam. He then instructed it to return and it duly complied. After this the Prophet (ﷺ) said, “I now have no concern for the people’s rejection.“ [Majma’uz Zawaa’id]

Masjid Shajarah is in the Ma’la district of Makkah. Note that there is another mosque just opposite (see photo below) which is also believed to be the place where the above incident occurred. And Allah (ﷻ) knows best.