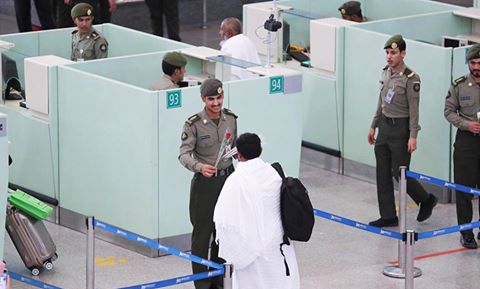 Saudi Arabia’s Deputy Crown Prince Mohammed bin Salman confirmed that the fees for Hajj and Umrah visas this year do not exceed $13.
On the service for the pilgrims, he pointed out that the goal is to provide the opportunity for the largest number of Muslims to perform Hajj and Umrah and reflect the honorable image of the Kingdom in the service of the Two Holy Mosques.
The Council of Economic Affairs and Development, chaired by Deputy Prince Mohammed bin Salman bin Abdulaziz, paid great attention to pilgrims in an effort to give them all the necessary facilities and provide them with the best services to perform the rituals of Hajj and Umrah with ease and facility.
The detailed Vision of the 2030 program outlines three main objectives of the pilgrim’s service, which was announced in 10 programs approved by the Economic and Development Council to achieve the 2030 Vision.
The program has eight indirect goals including: improving the urban landscape in Saudi cities, developing the tourism sector, preserving and advertising the Islamic, Arab and national heritage of the Kingdom.
The programs of the Ministry of Hajj and Umrah are aimed at developing Hajj and Umrah services and raising awareness of how to use modern technological tools to serve the pilgrims.
These include, “smart phone applications for Hajj and Umrah services, dealing with digital maps and identifying websites related to Hajj and Umrah, and how to take advantage of the existing electronic services they provide.”