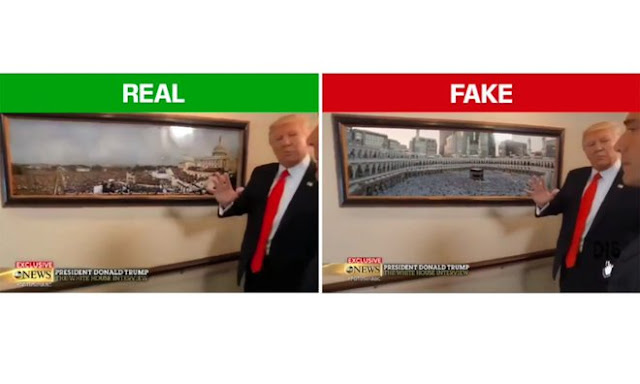 ARAB NEWS  Tuesday 28 February 2017
A fake video of US President Donald Trump “expressing awe and wonder over a massive crowd gathered around the Kaaba in Makkah” has gone viral on social media.
The video is a manipulation of a real one in which Trump was pointing to a picture of the crowd that attended his inaugural ceremony on Jan. 20 in front of Capitol Hill in Washington.
Frame by Frame – Fake Vs Real
Trump has been locked in a dispute with major US news outlets over the number of people that attended his inauguration.
In the fake video, he is seen pointing to the Kaaba photo and is heard saying: “One thing this shows is how far over they go here, look how far this is, it goes all the way down, all the way down. Nobody sees that, you don’t see that… but when you look at this tremendous sea of life — I call it sea of love — it’s really something special, that all these people traveled from all parts of the country, maybe the world…”
Trump has regularly attacked the media, and at a gathering of conservative activists on Friday he criticized news organizations that he said provide “fake news,” calling them the “enemy” of the American people.
Just three days ago, the White House excluded several major US news organizations, including some it has criticized, from an off-camera briefing held by the White House press secretary.
Reporters for CNN, the New York Times, Politico, the Los Angeles Times and BuzzFeed were not allowed into the session in the office of Press Secretary Sean Spicer on Friday. The decision drew strong protests.