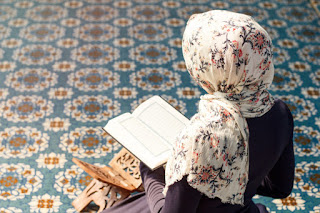 BEESTON – Following Christchurch terrorist attack last Friday, which left 50 Muslims killed and more injured, people around the world have remarkably reacted with tremendous love and support for Muslims, in addition to gifts and messages.
In this context,  a British woman from Nottinghamshire visited Ibraheem Mosque in Beeston town just to pay her respect and got out of it as a Muslim, IlmFeed reported on March 18.
IlmFeed, a Muslim news company based in London, posted a Youtube video on its channel on Monday, in which one could hear a commentator saying: “What happened between dhur and asr at Ibraheem Mosque in Beeston is basically that a woman came with some flowers and a card to present them as gifts to the Muslims who congregate in the mosque.”
“She walked into the area in which the worshippers congregate and then went over across the mosque to a different room to see if there’s anyone there to find a big group of brothers who are having something to eat.”
“She explained to the group of worshippers about the reasons of her visit to the mosque, ‘you know I’m here because of what has happened in New Zealand and I’ve brought these gifts to show my respect to you,’ the British lady said.
According to the commentator, “the Muslim worshippers asked her to come and sit down with them to have something to eat or drink together.”
The lady agreed and had some tea to drink while sitting with them. “The group had a discussion around the Islamic faith and dawah and she was listening very closely,” IlmFeed’s audio segment said.
The unnamed commentator said: “Subhanallah, she took her shahada and she walked out of there Muslim. The Australian terrorist of European ancestry killed 50 Muslims and injured more than dozens of them, unfortunately, some of them are currently suffering from life-threatening injuries. However alhamdulillah, what he has actually done is giving those Muslims martyrdom and road to the Heavens, while also spreading the message of Islam around the globe.”
Converts in the UK
IlmFeed is dedicated to publishing informative and inspirational articles about Islam and Muslims. Since launch in March 2014, it has quickly become one of the most popular UK-based Islamic websites in the world and its popularity is continuing to rise.
Beeston is a town in Nottinghamshire, England 5.5 km southwest of Nottingham city center. To the immediate northeast is the University of Nottingham’s main campus, University Park.
The English town has a population of 37,000 people with 71.2% being of British and 28.8% being from different ethnicities with 10.3% Chinese, 10.25% European, 2.7% Indian and 2.11% Pakistani in addition to other nationalities.
Reports assured that thousands of British people convert to Islam annually and there are approximately 100,000 converts to Islam in Britain, where they run two mosques.