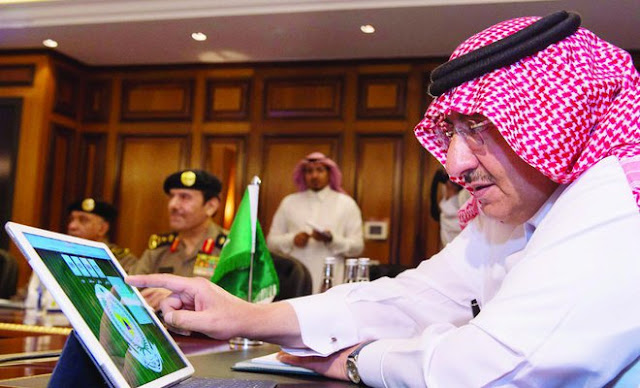 Vice Custodian of the Two Holy Mosques Mohammed bin Naif at the launch of the electronic safety service Salamah on Wednesday. (SPA)

Arab News Thursday 2 March 2017
Vice Custodian of the Two Holy Mosques Mohammed bin Naif said concerns over the safety of citizens and residents remains a priority for King Salman
.
Prince Mohammed’s remarks came during his launch of the electronic safety service Salamah at his office in the Interior Ministry Tuesday.
The new service was launched by the Directorate of Civil Defense to allow company owners to get safety licenses electronically, without the need to visit Civil Defense offices.
Prince Mohammed said the preservation of safety and stability for all people is a strategic goal of the Interior Ministry.
In its drive to develop its services, the ministry works to exploit technology to facilitate procedures, and save time and effort for citizens and residents, he said.
Prince Mohammed thanked Civil Defense staff for their dedicated efforts toward their religion and country. He stressed the importance of involving citizens in the work of the Civil Defense via available technology and social media, adding: “We are all security men.”
At the outset of the event, Prince Mohammed watched a presentation on the Civil Defense and another on the Salamah service.
Civil Defense Director General Sulaiman bin Abdullah Al-Amr said Salamah is part of the electronic services the Civil Defense plans to launch to facilitate safety procedures for citizens and residents. The first stage of these services will be launched in Makkah, Riyadh and the Eastern Province, he added.