The cost of performing the haj for the 1443H/2022 season will be finalised after it is tabled before the Cabinet, says Minister in the Prime Minister’s Department (Religious Affairs) Idris Ahmad(pix).

He said Tabung Haji representatives who had returned from Saudi Arabia would brief him on the cost of performing the haj soon.

“Whether it goes up or not, let’s wait for the decision of the Cabinet,” he told the media after witnessing the handing over of contribution from the Chinese Embassy to the Federal Territories Islamic Religious Department’s (JAWI) Food Bank here, today.

He was reported to have said that the cost of performing the haj was expected to go up following the latest developments on the standard operating procedure (SOP) and tight health protocol enforced by Saudi Arabia to curb the spread of Covid-19 among pilgrims.

He said Tabung Haji was also reviewing closely the costs due to inflation rates as well as the regulations and new taxes in Saudi Arabia. 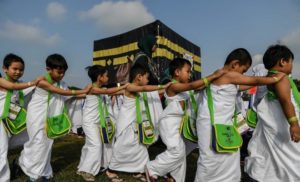 This, he said, included the haj visa charges introduced during the 1441H/2020 season and the hike in Value-added Tax (VAT) in Saudi Arabia from five per cent to 15 per cent starting from July last year.

Currently, Malaysian pilgrims would have to pay RM9,980 – with the rate remaining unchanged since 2009 – while the balance of RM12,920 is borne by Tabung Haji.

On the JAWI Food Bank programme, Idris said today’s contribution from the Chinese Embassy was the third one by them to assist Malaysians impacted by the Covid-19 pandemic, bringing the sum received from the embassy to RM400,000.

“The contribution proves that the bilateral ties between Malaysia and China has remained firm,” said Idris, who witnessed Chinese Ambassador Ouyang Yujing handing over the aid to JAWI director Datuk Mohd Ajib Ismail.

Idris said the JAWI Food Bank had channelled food pack contributions to 270,000 recipients in the Federal Territories of Putrajaya, Kuala Lumpur and Labuan.

Meanwhile, Ouyang said the Covid-19 outbreak in Malaysia was increasingly under control, however, some Malaysians impacted by the pandemic were still in dire need of assistance.

“We are overwhelmed at observing our friends in JAWI working hard to channel donations to the needy. We hope this effort (contribution) can help ease their burden,” he added.-Bernama