May 02, 2021
Home Global We expect more pilgrims from outside Kingdom during last 10 days of Ramadan – Saudi Hajj Ministry

The Deputy Minister of Hajj and Umrah Dr. Abdulfattah Mashat has stated that the Kingdom of Saudi Arabia exoects more visitors from outside the Kingdom during the last 10 days of Ramadan,.

In addition, Dr. Mashat also warned against dealing with any online accounts or websites claiming to issue permits for performing Umrah or praying in the Grand Mosque.

Dr. Mashat stressed that the security authorities are carrying out their duties and doing a very great job in monitoring, following up these websites and taking to task everyone who violates the regulations.

Masjid Al Nabawi ready to receive pilgrims in last 10 days of Ramadan – Haramain Presidency
In the Nashrat Al-Nahar (Day Bulletin) on the Al-Ekhbariah satellite channel, Dr. Mashat said: “Be very cautious. Don’t ever deal with them. There is a great danger that you may end up giving personal data to someone you don’t know.” 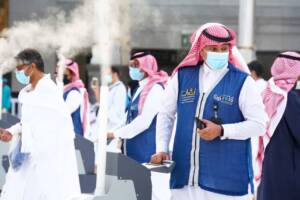 Mashat expects an increase in the number of visitors arriving in the Kingdom for performing Umrah, during the last 10 days of Ramadan.”

He further said: “We have set up a number of centers in the vicinity of the Grand Mosque in Makkah, known as “Care Centers”.

They provide direct services and grant Umrah and prayer permits to visitors after their arrival in the Kingdom, ensuring they have followed all the health measures and precautions. There are specialist companies in the field of Umrah whose main function is to organize Umrah pilgrims coming from abroad. There is coordination between these companies and the Ministry of Hajj and Umrah to issue permits beforehand.