The governor of Bauchi state, Senator Bala Mohammed, has reaffirmed the commitment of his administration to ensure the welfare and wellbeing of both Muslims and Christians intending pilgrims to Saudi Arabia and Jerusalem.

The governor who gave the assurance when the official master of the ceremony of Bauchi state government, Chadi Mohammed, conducted members of the FCT Minister’s Press Corps on a tour of the ultra-modern permanent hajj camp at Sir Abubakar Tafawa Balewa International Airport, Bauchi, worth N658 million for use by both Christian and Muslim pilgrims.

Chadi stated that the decision to build the camp was born out of the desire of his administration to improve the welfare and wellbeing of the state pilgrims as well as enhance the quality of life of the people of the state.

He noted that the government of Bauchi state recognised that the people of the state were very religious, and needed to be provided with some amenities to discharge the sixth pillar of Islam.

Mohammed said the camp, which was the best in West Africa has an administrative block, camp clinic, over 1,500 capacity multi-purpose hall, mosque and ablution area. 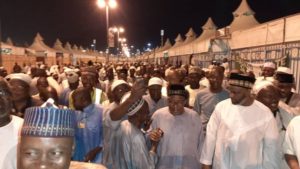 He further revealed that the camp would also be used for commercial purposes and assured that the journey of pilgrims from Bauchi to Saudi Arabia would be done with respect and dignity.

” The camp has male and female hostels with many rooms, screening hall, 1, 500 capacity multipurpose hall, mosque, ablution sites, toilets, kitchen and a clinic.”