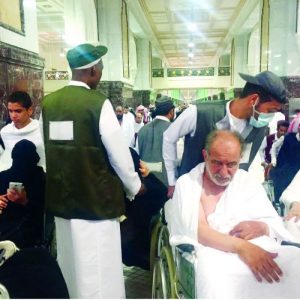 The officially fixed fee for the service is SR75, but wheelchair pushers charge up to SR200 taking advantage of the Ramadan crowd.
A number of pilgrims have complained about exploitation by wheelchair pushers inside the Grand Mosque saying they were charging exorbitant prices.
“Starting Ramadan, they increased the charges to SR200 despite the fact that the authorities have fixed the price for the service at SR75,” a pilgrim told Al-Madina Arabic daily.
Pilgrims have called upon the Presidency of the Two Holy Mosques’ Affairs to intervene and control the price hike and keep a watch on the service providers who exploit pilgrims.
A senior official of the presidency denounced the illegal practice and said wheelchair pushers who charge exorbitant rates from the pilgrims are “mercenaries”, who are not licensed to extend the service. He urged pilgrims to deal only with wheelchair pushers who wear official badges and numbers on their chests.
Fahd Al-Saedi said he visited the Grand Mosque with his family last week to perform Umrah. “I looked for a wheelchair to help my sick mother perform the rituals without difficulty. The wheelchair owner asked me to pay SR200 for performing the saie (the ritual walk between the mounts of Safa and Marwa),” he told Al-Madina.
He insisted wheelchair pusher had pinned a license card on his chest and wore a grey jacket.
Al-Saedi said it was the time for Isha and he could not find any official to complain about the individual. “I approached another person whose jacket was of a different color, but he also demanded the same amount,” he said.
Al-Saedi said he later found another wheelchair pusher who did not wear any card but he took SR120.
Mohsen Al-Masawi, another pilgrim, asked the presidency officials to make surprise inspections of wheelchair service providers at Safa to monitor any price hike.
They should ask wheelchair owners to return extra money they have taken from the pilgrims. They should also prevent unlicensed wheelchair owners from entering the mosque.
Pilgrims look for unlicensed wheelchair owners to get the service at cheaper prices.
“I hope the presidency would take action against wheelchair owners who charge exorbitant prices from the guests of God. They should announce the measures taken against such violators,” Al-Masawi said.
He said presidency officials should be present at Safa during peak hours to take action against any violators.
Hassan Mohammed Al-Bariqi said wheelchair owners inside the mosque were harassing pilgrims to make more money. “This gives a bad impression about the Kingdom’s services to pilgrims,” he pointed out.
He said they are likely to further increase the prices in coming days of Ramadan in the absence of official monitoring.
The authorities close their eyes on these wheelchair service providers for unknown reasons, said Al-Bariqi. “We request Sheikh Abdul Rahman Al-Sudais, head of the presidency, to intervene to prevent charging exorbitant prices, which overshadow the services provided by the government to pilgrims.”
Fadel Al-Amri accused the officials of sympathizing with the violators. He said an official in charge was not ready to punish a violator for his excesses.
“I informed the official about a wheelchair owner who charged me SR200 and found him asking the same amount from another customer. The official just asked the owner to give him the license but did not ask him to return the extra amount taken from the pilgrims,” Al-Amri said.
“When I asked a wheelchair owner who charged only the official rate of SR75 about the punishment given to violators, he said ‘it depends on your relationship with the official’,” he explained.
Al-Amri stressed the need to put an end to such undesirable practices inside the Grand Mosque.
Al-Madina presented the complaints of pilgrims to Mashhour Bin Muhsin Al-Manaami, undersecretary at the presidency. He said the presidency wishes to stabilize prices of wheelchairs and prevent exploitation of pilgrims by wheelchair owners who charge exorbitant prices.
“There are committees to monitor the wheelchair service. Wheelchairs are available free of charge for the pilgrims at the designated place, but people who seek the services of the pushers are charged a reasonable price,” he explained.
Al-Manaami urged pilgrims to make use of wheelchairs supplied by the presidency free of charge and avoid using the services of unauthorized wheelchair pushers. “We have taken steps to seize wheelchairs from those who provide the service illegally,” Al-Manaami said.
Saudi Gazette