Osman Arshad and Shahab Chittoor, two young men from Pakistan and India, are in the news these days to travel on foot to perform Hajj. The auspicious journey of these youngsters is also well discussed on social media and during the trip, they are both well received. But the question is, what do these two young men want to prove by walking a long distance?

Shahab Chittoor, a young Indian, started his religious journey from the Indian state of Kerala a few weeks ago and will reach the blessing of Hajj in 2023 by walking a distance of eight and a half thousand kilometres from Kerala. Meanwhile, Shahab Chittoor will reach Iran via the Taftan border by travelling through Pakistan and then from Iran to Iraq and Kuwait and then reaching its final destination in Mecca. 25-year-old Osman Arshad from Okara started his journey on 1 October and will arrive in Mecca after about 8 months through Iran, Iraq and Kuwait.

Hajj is a sacred religious obligation imposed on those who are able, and it is a personal affair between God and the servant. But publicizing this personal matter and leaving on this trip without warning is really to please God or do these young people desire personal fame?

The question that social media users are asking today is that with the availability of modern means of travel and it is less than the expenses of Hajj on foot, why do these young people want to travel such a long distance on foot and suffer on their own? if the intention of Hajj is to visit the house of God and please our creator, then millions of people from both countries, i.e. Pakistan and India do go on Hajj every year, and they can also be part of the hajj contingent from these countries. And if the purpose of this long journey was to gain personal fame, why was the pilgrimage chosen for it?

Both young men are staying at a hotel or host in the city or region they arrive at night while travelling during the day. In general, the two young men travel 25 km per day. Twenty people accompany them on this journey, chanting slogans, cheering and greeting them while police from each district act as security. Is this pilgrimage done on foot for the sake of fame or do these people want to perform a religious duty?

In this regard, a friend shared a fatwa of the Karachi Banuriya Society, which is also available online. He asked for it

“If a person wants to perform Hajj from anywhere in India on foot in today’s hi-fi era, and he has all means of travel for Hajj, i.e. he can travel by air and besides all Hajj expenses. After his departure, there seems to be a fear of affecting his work as well Just because performing the obligatory Hajj on foot will get more rewards. So is such a person performing Hajj on foot or not? And did the Prophet of God, may God bless him and grant him peace, describe the virtue of Hajj on foot?

The answer given by Dar Al-Fata to the Benuria Association is also present.

SIMILIAR: Two Indonesian ls set off for Hajj by bicycle

It is permissible to go to Hajj on foot, provided that he does not intend to gain fame and appearance. But this is not a year. He, may God’s prayers and peace be upon him, did not perform Hajj on foot and did not encourage him to perform Hajj on foot. The Holy Prophet, may God bless him and grant him peace, forbade such difficult actions.

However, according to some scholars, many companions of the Prophet, may God bless him and grant him peace, performed Hajj on foot. It is said that Hazrat Imam al-Hasan (may God be pleased with him) performed 25 pilgrimages on foot despite riding.

According to the scholars: The obligation of Hajj is required to arrange the expenses of arriving in Mecca on horseback, the expenses of the necessary trip, and the expenses of the family until returning. It is not required for him to perform Hajj on foot if he does not have enough money to deliver it. But if a person performs Hajj on foot, it is not illegal either. But it is stipulated for him that he has the strength to walk so that the pain of the road does not cause heartache and difficulty, and this walking is only for the reward and approval of God, and not for the sake of fame and fame. 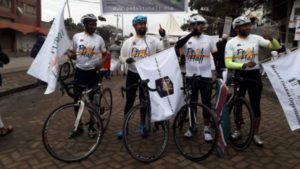 It is illegal to publish your work in newspapers and advertisements. The sheikhs who excelled in performing the pilgrimage on foot tried to hide it as much as possible, and the purpose of that was to achieve austerity and self-control, not to follow the Sunnah of the Prophet because he did not perform the pilgrimage. And none of his followers. According to the scholars: If there is no hypocrisy in the heart with sincerity and merely to please God, it is permissible to perform Hajj on foot.

Osman Arshad and Shehab Chittor are young and probably not married. They are making this long journey for the pleasure and satisfaction of God Almighty or their goal is just to establish personal fame and record, they know better. However, it is certain that on this long journey he is not alone, but everywhere a crowd of people walks with him. It video making team, Police, Security, and Hospitality in each city. For Punjab, there may not be many security problems for them, but the journey to the Pakistan-Iran border in Balochistan is very difficult and full of dangers. Pilgrims heading to Iran are often shot here, so travelling these young people separately is like risking their lives.