The National Hajj Commission of Nigeria (NAHCON), has began a four-day post Hajj activities Monday, 14th November 2022, to be concluded with a stakeholder’s meeting and awards on Thursday 7th.

The activities began with a meeting with State Pilgrims’ Welfare Boards/Commissions/ Agencies at the Hajj House, NAHCON headquarters in Abuja.

A statement by the Head of Public Affairs of NAHCON, Fatima Sanda Usara said Monday’s meeting will be followed by a meeting with Licensed Tour Operators on Tuesday.

Discussions, she said will dwell on the “review of 2022 Hajj, update on refund expected from the Kingdom of Saudi Arabia, Reconciliations of Hajj fares and way forward on the Hajj Savings Scheme (HSS)”.

Mrs Usara said Preparations for Hajj 2023 was discussed Monday in which State forum of Executive Secretaries and other members were in attendance.

She stated that NAHCON Chairman, Alhaji Zikrullah Kunle Hassan, congratulated all members for having participated in 2022 Hajj because some countries could not attend the year’s pilgrimage.

“He stated that the Commission had reviewed the 2022 Hajj and will forward its report to the states for review and contributions in order to have a common stand. He expressed hope that all stakeholders have learned one or two lessons from the 2022 Hajj in order to avert a future reoccurrence of any mistakes”.

Alhaji Hassan also said it will require all parties to pull resources together to accomplish greater success in the Hajj industry.

On reconciliation, the Commissioner in charge of Policy, Personnel Management and Finance, Alhaji Nura Hassan Yakassai, informed members that the process has been concluded and documents signed between NAHCON and 33 states while three other states are yet to sign.

Those yet to sign are Ondo, Osun and Tarabas.

“He briefed that having to reconcile between NAHCON, states and now Ja’iz Bank additionally slowed the process down. While refunding has commenced based on request by states” he said.  The Commissioner also disclosed that more states will receive their refunds based on the laid down procedures. According to the Commissioner, some states will refund NAHCON “specific amounts of money”.

One of the issues of contention in the year’s reconciliation is the Central Bank of Nigeria’s (CBN) 2% service charge.

Alhaji Yakassai disclosed that NAHCON had accepted to bear 1% off the states but they were to note that from 2023, the standard CBN service charge is 2% unless there are new developments.

As for the Hajj Saving Scheme (HSS), Alhaji Zikrullah Hassan remarked that the states and NAHCON have reached a degree of agreement and would announce their stand on the scheme shortly.

He said the announcement will be done after the meeting on Wednesday, 13th November 2022. 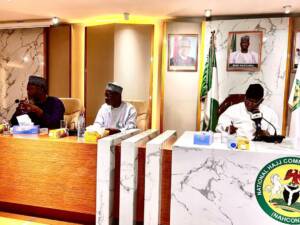 The Chairman also reminded the gathering that NAHCON had made a request for refund to the pilgrims’ establishment in Saudi Arabia before departing the Kingdom from Hajj 2022.

Contributing, the Adamawa state Executive Secretary who doubles as the Financial Secretary of the Forum and Acting Secretary for the day’s activity, Alhaji Abubakar Sadiq Salihu, expressed gratitude to all NAHCON staff and his colleagues that contributed positively to the 2022 Hajj one way or the other. He reiterated the fact that the two bodies need each other to function effectively.

On his part, the Taraba State Chairman of the state pilgrims’ office Alhaji Hamza Baba Muri, specifically appreciated a NAHCON staff, Mr. Umar Muhammad Kalgo over the tremendous assistance he offered the state board that enabled proficient movement of pilgrims’ luggage.

Finally, Chairman of the Forum of States, Mr Idris Almakura drew the attention of members to the fate of pilgrims that lost their lives during the Hajj and the need to settle their debts and death certificates.