Recently, there were deliberations in the Independent Hajj Reporters WhatsApp platform – a platform where Nigerian Hajj stakeholders converge – on whether NAHCON can survive without a feeding spoon from the Federal Government, especially if the federal government eventually implements the hibernated Orosanye report. The discussions were centred on the ability of the apex hajj regulatory body to survive the potential political trajectory.

It will be recalled that the Federal Government constituted committee to reduce the cost of governance and adjusting the structure where necessary. The committee which was headed by Orosanye marked the national hajj commission of Nigeria, Christian pilgrims commission and other some MDAs for scrap or merge citing dwindling revenue income. After the rigorous in-house debate, some hajj intellectuals in the group made useful suggestions on immediate and long-term solutions for a financially autonomous hajj body.

However, while the Orosanye report posed a serious threat to the existence of NAHCON as the apex hajj regulatory body in Nigeria, there are other more survival-threatening policies – which will effectively render the basic functions of NAHCON peripheral if the Establishment ACT 2006 is not amended immediately.

First, the Nusuk platform, “all visa for umrah” and the Business to client model present more challenges to the existence of NAHCON and by extension States Muslim pilgrims’ welfare boards unless hajj stakeholders come together to find the cure to the potential legal ailment in the hajj and umrah industry. 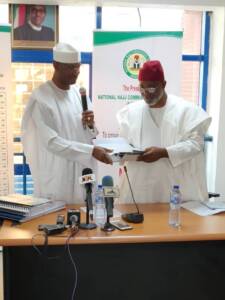 Secondly, NAHCON ACT became active on the 24TH of May, 2007 – the day the then Secretary to the Government of the Federation, Mahmud Yayale Ahmed inaugurated the first board of NAHCON inside the Olusegun Obasanjo Hall in the office of the Head of the Civil Service of the Federation. Taking cognizance that the ACT has never been amended since then, we need to examine whether the ACT currently conforms with the evolving hajj policies that has been formulated by the Saudi Arabia’s Ministry of Hajj and Umrah.

More critically, there is need to interrogate the new umrah policies, especially the business-to-clients models, the Nusuk platform and the ‘all visa for umrah’ that has allowed individual as opposed to groups to registered for Umrah online. Specifically, does section 4 subsections (i), (ii), (iii) and (iv) of the NAHCON establishment ACT empower NAHCON to regulate “individual” or “individuals” going to Saudi Arabia? If NO, what becomes of NAHCON registered Tour Operators if potential pilgrims decide to be using Nusuk to apply for Umrah?

In simple terms, the NUSUK platform allowed Muslims all over the world wishing to perform Umrah or lesser pilgrimage to obtain the necessary visas and permits as well as to book related packages electronically without a third party.

The Nusuk platform creates an opportunity for intending Umrah pilgrims from Nigeria to self-registered and performs Umrah in Saudi Arabia thereby bypassing NAHCON regulated Umrah ecosystem. This combo software breaks the legal chain of having to compel intending Umrah to process their travel itineraries through NAHCON or even CAC-registered tour operators in Nigeria. With this, the fate of over 250 registered hajj and umrah operators hangs within section 4 of the NAHCON ACT.

More explanations on this later.

Secondly, the resolve of the Saudi Ministry of Hajj to allow holders of all types of Visas to perform Umrah creates a serious dilemma for Hajj and Umrah operators in Nigeria. Though the policy is part of the Kingdom’s efforts to create an easy-to-do process for Umrah applicants, nonetheless, any process that allows individuals to process visas and travel to Saudi Arabia for Hajj or Umrah manifestly creates security and diplomatic challenges. The criminally minded individual might ‘utilize this window’ to commit atrocities in foreign land using Nigeria’s passport.

Meanwhile, some hajj-participating countries are exploring diplomatic channels to convince the Saudi Ministry of Hajj of the negative effects such policy will have on their domestic hajj legislations.

For example, on the 19th of august 2022, the Indonesian Consulate General in Jeddah called on Saudi Arabia to review its decision to implement a business-to-consumer business-to-clients (B2C) scheme for the Umrah pilgrimage. 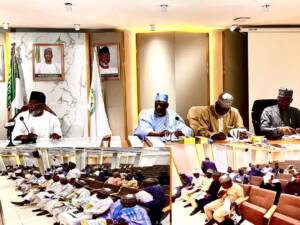 According to the Indonesia consulate in Jeddah, Nasrullah Jasam “The B2C scheme is also not in accordance with the regulations in Indonesia, which require the departure of Umrah pilgrims (to be conducted) through a licensed PPIU (Umrah pilgrimage organizer),”.

Previously, the Umrah pilgrimage is conducted through a business-to-business (B2B) scheme, which requires individuals to register through his/her country-licensed agencies while the authorized agencies, in turn, required registration with Saudi Arabia’s government-accredited Umrah service providers agencies.

Moreso, the NUSUK policy statement needs a deeper analysis to undersatdn whether it may be extended to the Hajj sector. According to Minister of Hajj and Umrah Dr Tawfiq bin Fawzan Al-Rabiah, “the Nusuk platform is an extension of continuous efforts to improve the quality of services provided to pilgrims using the latest technology. He also stated that “a range of other services will be added to the platform at a later stage and these will include interactive maps, a calendar for offers and activities, a digital instruction guide in several languages, and health information and services.” A wide range of services may include hajj-related services even though it also has basic hajj services like visas, booking hotels and airlifts.

The spirit behind the letters is that no organisation is allowed to organize or coordinate the movement of persons from Nigeria to Saudi Arabia for Hajj or Umrah without being licensed or regulated by NAHCON.

READ ALSO: FROM THE ARCHIVE: How NAHCON was saved from Oronsaye Report hammer (II), by Ibrahim Muhammed

Interestingly, NUSUK platform has allowed those “individuals that could have been ‘coordinated’ by those organisations being regulated by NAHCON to utilize Hypertext Transfer application Protocol to register for Umrah using Saudi Arabia’s government control NUSUK platform. This is where my curiosity antennae wake me up.

It is said that “If you choose not to deal with an issue, then you give up your right of control over the issue and it will select the path of least resistance.”

‘ALL VISA FOR UMRAH’ VS NAHCON’S REGULATORY SYSTEM

Recently, authorities in Saudi Arabia announced that all types of visa holders who plan to perform the Umrah pilgrimage will be eligible to do so.

According to the announcement of the Saudi Arabia Ministry of Hajj and Umrah, the same Ministry has permitted all types of visa holders from other countries worldwide to visit the country for tourism for visit purposes and can perform Umrah while staying in the kingdom.

Case sample: Ibrahim Muhammed entered Saudi Arabia with a visit visa, transit visa or any orther visa and decides to perform Umrah. On return, informed his friends of how a visit visa can be used for Umrah. Consequently, people start using visits and other types of visas to enter Saudi Arabia for Umrah.

Given the prevailing circumstances, it is time to review Section 4 of the NAHCON ACT to give it a wider role to make it impossible for any citizen of Nigeria to travel to Saudi Arabia for a visit, umrah or hajj without passing through NAHCON’s regulating system.

Therefore. amending section 4 sub-section 3 of the NAHCON act will strengthen the commission’s ability to have a comprehensive database, and protects and enhance the diplomatic relationship with the Kingdom of Saudi Arabia.

By implications, the primary responsibilities of NAHCON in the Umrah industry may be walking on a slippery slope unless section 4 of NAHCON Act is amended immediately.” The term “Licensing of the organization engaged in coordinating and organizing hajj and Umrah should be expanded to include: ‘coordinating Individuals or individuals travelling to Saudi Arabia through a visit visa, or any other types of visas for the purpose of performing Umrah or Hajj in Saudi Arabia.

While yours sincerely was assembling this piece, the Kingdom activated another joker when on Tuesday, the Saudi Arabia’s Council of Ministers approved the extension of the period of stay for the single-entry visit visas to three months and also extend the duration of stay of transit visas to 96 hours without any fee. The kingdoms said Cabinet decision will be applicable to the single entry of visit visas or transit visas for all purposes – meaning that those on transit visas can utilize the 96 hours to perform Umrah.

Except, we immediately summon stakeholders meeting to kick start the amendment process, we may be running out of options, but running out should not be an option for us in the hajj and umrah industry.