Arshad, has set out on his ‘dream journey’ on foot to the holy city of Mecca from Okara in the Punjab district of Pakistan. Image Credit: Supplied

A young Pakistani man has set out on a once-in-a-lifetime ‘dream journey’ on foot to the holy city of Mecca from Okara in the Punjab district of Pakistan.

Usman Arshad, 25, is walking to Mecca to arrive in time for the 2023 Hajj pilgrimage, carrying only a small backpack and a black umbrella. 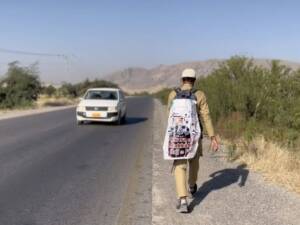 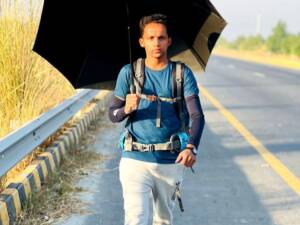 With the Pakistani flag pin on his shirt, Arshad began the spiritual journey from his hometown Okara on October 1 and hopes to reach his dream destination in about eight months. Arshad will reach Saudi Arabia, travelling through Iran, Iraq, and Kuwait. The trip is around 5,400km and he is walking an average of 30 to 40km each day.

Arshad says he decided to begin the Hajj pilgrimage after walking 1,270 kilometres in 34 days last year from Okara to the Khunjerab Pass on the Pakistan-China border, known as the highest border crossing in the world. “When I returned from Khunjerab, I decided to walk toward Mecca for Hajj. This is the voyage that every Muslim desire. So I decided to embark on this dream journey on foot because I love walking” says Usman Arshad.

‘Spread the message of peace’

The youngster, who is deeply focused on the practice of walking, says he also plans to visit religious sites in Iran and Iraq on his way to Mecca. Walking through different countries also means that “I would meet different people along the way and spread the true message of Islam which is peace and respect.”

The young man says he is not bothered about fame but wants to complete his religious duty by walking toward the holy city and also spread the message of peace and goodwill.

Usman Arshad has set out on 5,400-km-long journey and he is walking an average of 30 to 40 km each day.Image Credit: Supplied

Arshad said that the trip would cost him around Rs1.5 million ($6,800) covered by him and his family. He had been working on his plan for a year and had requested the Ministry of Foreign Affairs to speed up the visa process and hoped he’d get visas in time before reaching Iran.

Sharing the details of items in his bag pack, he said it contains a few clothes, mobile phone, charger and power bank, umbrella, torch, water bottles, and a medicine kit. “If I need anything else, I’d just buy it but I don’t want to carry heavy stuff that slows down my pace,” he said.

Arshad, a student of media communications and a digital creator, is also documenting the entire journey on his social media accounts, sharing daily updates with his more than 50,000 followers. His videos share the details of the natural and cultural landscape of the cities in Pakistan he has so far travelled, the people he met, and the food he had on the way.

Though the focus is on the Hajj pilgrimage, his videos also give Arshad an opportunity to showcase the culture, beauty, and hospitality of the regions he has journeyed. “The hospitality in Balochistan is incredible. The people are very welcoming and often invite me for traditional food. This journey is an immersive cultural experience too,” Arshad shared. 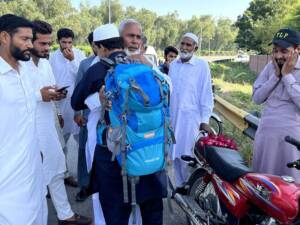 Inspiring people along the way

He is also meeting and inspiring dozens of people en route. Drivers and passersby often stop to greet Arshad, shake hands and give their love and respect to him after seeing the poster on his backpack that says ‘From Okara to Mecca for Hajj on foot’. “Many people come to just pay their respects and ask me to give their Salam to the holy city of Mecca,” he said. “They encourage me and some say that my trip is an inspiration for them to pursue their dreams. It feels very happy and proud to receive greetings and prayers from people.”

Arshad mostly stays at the homes of friends and family in the cities and towns he passes through. But if there is none in the city, then he would head to mosques or hotels for overnight stays. “Because of regular updates on social media, many people contact me and offer a place to stay or home-cooked meals.” Once he leaves Pakistan, he says he’d stay at hotels and may also camp out. Though he is walking toward Mecca, he says that his return home will be by air.

Arshad is not the first person to walk to Mecca from Pakistan. A Pakistani man known for his peace walks, Kharlzada Kasrat Rai, walked from Karachi to Mecca in 2013. He received a hero’s welcome in Mecca after the three-month voyage.