The National Hajj Commission of Nigeria has commenced the issuance of License to State Muslim Pilgrims Welfare Boards as part of its preparation towards 2017 Hajj exercise.
This was contained in a statement signed by the commission head of media Uba Mana. It said “After completion of verification exercise embarked upon to determine the capacity of Tour Operators, State Muslim Pilgrims Welfare Boards and agencies applying for Umrah and Hajj exercises, the National Hajj Commission of Nigeria in has commenced issuance of License to SMPWB and Agencies as part of the activities towards the 2017 Hajj Exercise.  The Licenses is graded A, B and C.  SMPWB are rated according to the result of the committee that conducted the verification exercise.  The Three- member team was led by the Head of Licensing Unit, Malam Liman Usman. It also included Barr Abdulkadir Moddibo (Legal) and Muhammed Shira (Inspectorate and Compliance). 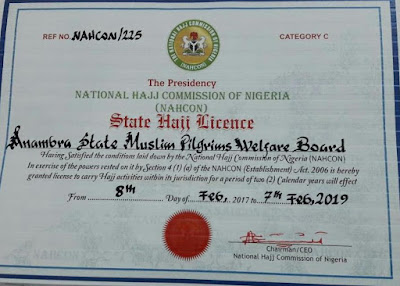 The event which was presided over by the Chairman/CEO of NAHCON, Barr. Abdullahi Mukhtar Muhammad, MON has so far witnessed presentation of License to about 20 states pilgrims welfare boards.  According to the Chairman of the commission, “the granting of operating license is to spur the states towards greater service to their pilgrims” and also advice them “to abide by the conditions set out for the granting of the license.
“In his response,  the Executive Secretary of Gombe State pilgrims Welfare Board, Alhaji Usman Gurawa expressed appreciation for the gesture stressing that the state would work very hard to justify the licensing and to make sure that the 2017 witness greater improvement in services rendered to the pilgrims, noting that since the Commission’s verification visit, a lot has been put to upgrade its physical infrastructures as well as its human capital development with a view to improve the capacity of the board’s welfare services to the pilgrims.”  The License which is valid for two years is expected to expire in 2019.
Hajj News