Despite Saudi Arabia’s “ambitious” 2030 vision to “double the number” of Indonesian tourists and haj pilgrims over the next few years, Saudi Haj and Umrah Minister Tawfiq Al-Rabiah said the 2023 quota for haj  Indonesia will “remains the same”  – at a little over 100,000 pilgrims.

Since the early days of COVID-19 in 2020, the haj quota for Indonesia has been reduced by more than half from the original allocation of 218,150 visitors. Citing the ongoing pandemic and security, Al-Rabiah said the quota could not be increased just yet, despite President Joko “Jokowi” Widodo’s appeal to expand the number of visitors allowed.

“Concerning the haj quota, it will remain as per the previous agreement. The [decision] was made to ensure optimum services and for security reasons in controlling the high volume of people,” he said on Monday.

As the country with the world’s largest Muslim population, the waiting list for Indonesians seeking to make the pilgrimage could last up to decades. Data for 2022 from Databox revealed that on average, prospective pilgrims would have to wait 22 years before making it to hajj– although the length of time changes drastically depending on the registrants’ residence. The South Sulawesi’s Bantaeng regency holds the country’s longest wait time, at 43 years.

On his first visit to Indonesia, Al-Rabiah met with Religious Affairs Minister Yaqut Cholil Qoumas on Monday, where the haj minister said that “intensive communication” between the two sides would continue in improving the quality of haj services. During the meeting, Yaqut said that the visa for umrah (minor haj) pilgrims had now been bumped up to 90-days from the previous 30-day allowance. “We talked about several things concerning the haj, from quotas to the improvement of services for female pilgrims, since the number [of women doing haj] is typically higher [than men],” said Yaqut. 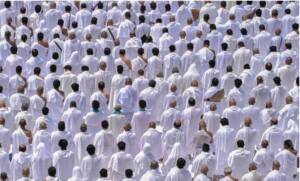 In early August, the Saudi government gave Indonesia an “unlimited quota” for umrah, a pilgrimage to the city of Mecca that can be done at any time of the year, unlike the mandatory once-a-lifetime haj. In accordance with Saudi’s 2030 vision to significantly increase its tourist income and rely less on oil sales, Indonesia has become one of Riyadh’s primary target markets. “We have invested billions of dollars in tourism. Indonesia is one of our key sources, with half a million tourists this year and 1.4 million visitors before the pandemic,” said Alhasan Aldabbagh, APAC chief marketing officer for Nusuk, a state-owned application for haj travels. “Our ambition is to double this number [over the next] few years,” he said.