Pakistanis say their Hajj and Umrah pilgrimage experience has been made “very easy” after Saudi Arabia introduced Urdu-language sign boards at the two holy mosques in Makkah and Madinah, saying it had reduced the dependency on tour guides.

The Saudi Ministry of #Hajj and Umrah has launched several initiatives under the Vision 2030 scheme to facilitate pilgrims from around the world. This year, Saudi authorities included directional, identification, and cautionary informational instructions in the urdu language on a majority of sign boards at the holy mosques in Makkah and Madinah at the start of Hajj and Umrah season for the ease of pilgrims from Pakistan.

Indonesia and Pakistan, the largest Muslim-majority countries by population, send the most pilgrims to Saudi Arabia.

According to statistics compiled by the Saudi authorities, about 200,000 Pakistanis performed Umrah between July 30 to October 4, 2022, the second-highest number of pilgrims from a single country after Indonesia.

Hamzah Gilani, a spokesperson for the Pakistani consulate in Jeddah, said the Saudi government’s decision to start using Urdu on formal signage at the Holy Mosques was a “fantastic boon” for Pakistani pilgrims, Arab news reported.

“This is a great indication of the Saudi government’s commitment to extend facilities to its expatriate population,” Gilani said.

Ayesha Gul from Rawalpindi said that she came for Umrah alone and had been “worried”.

“But these instruction boards in the Urdu language made the pilgrimage very easy as we even don’t need to ask someone for directions,” she said.

Saudi authorities announced last month that “women no longer require a male guardian” for travelling to Saudi Arabia to perform the Umrah pilgrimage. 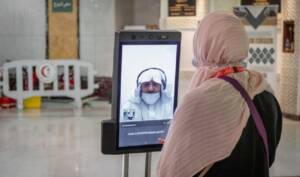 Gul said Saudi authorities had always been “very cooperative” at the airport, adding everywhere she went on previous trips to the Kingdom, language had remained a problem, which had now been solved by new Urdu instruction boards installed at every step at the Grand Mosque.

Another pilgrim from Gujrat, Javed Ahmed, who performed #Umrah this year after a gap of five years, said he had seen a lot of changes and added facilities had been increased “manifold”, including digital mobile apps and instruction boards in the Urdu language to facilitate the pilgrims.

“A lot of facilities have been introduced this time which have made the pilgrimage easy for us,” he said.

“I was not expecting this as mostly it used to be in Arabic and English but it was a surprise for me to find Urdu on every board all across the Haram,” he said.

“We are thankful to Saudi Arabia for including Urdu in the instruction boards as it not only makes our movement easy in the Grand Mosque but also gives us a sense of pride to find our national language at this holy place.”