The Office of the Chief Imam, Sheikh Usmanu Nuhu Sharabutu and The Ghanian President Nana Addo. 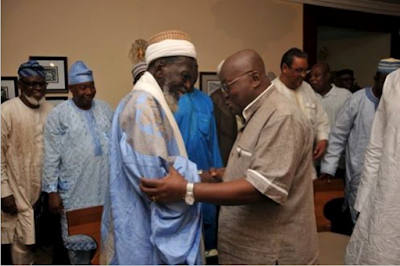 Nana Ado and Chief Iman Of Ghana
The Office of the Chief Imam, Sheikh Usmanu Nuhu Sharabutu has raised concerns about the newly constituted Hajj board saying it is too partisan.
This comes a few days after government released a 14-member committee chaired by former New Patriotic Part (NPP) Member of Parliament and Minister Sheikh IC Quaye.
Some regional Chief Imams have reacted to the names saying there was no consultation to include regional representatives.
Speaking to Citi News, spokesperson for the Chief Imam, Sheik Aremeya Shaibu said even the Chief Imam was not consulted before the announcement was made.
“It appears to me that the board has been rashly been composed without taking time to study the structure and the outcome of the work of the previous committee so we can learn the lessons from there. I would have wished that it would have been a bit more of looking at a structure, putting in place a certain interim Hajj board that will not be directly involved in the management and then you put in place an interim management that would be accountable to the interim board of trustees so that there would be some form of accountability.”
He explained that the defect in the previous board bothered on “accountability transparency” he said “was completely absent” and too partisan.
Sheik Shaibu further observed from all indications “It appears to me that there is going to be a repeat of that and that is my worry.”
This he said is because “even with the Chief Imam’s office, as far as I know, I am not aware of any such consultation. I served on the advisory board of the National Chief Imam, the opportunity would have been for us to also see and know those people who have been put in place.”
He also explained that the Chief Imam and his team bares no grudges against the current board but their worry “is more of procedure on how it has been composed and ones the Chief Imam has not been brought into the picture directly, the way we expect, then we are unable to comment even on the political background of the people.
Meanwhile, the Ashanti Regional Chief Imam, Sheikh Abdul Mumin Harun is suggesting that the board be dissolved and re-constituted to include regional representatives.
“It will allow for all the Regional Imams to be informed. We don’t want some people to blame the government and say that the government doesn’t like moslems and that is why some people couldn’t perform Hajj,” he explained.