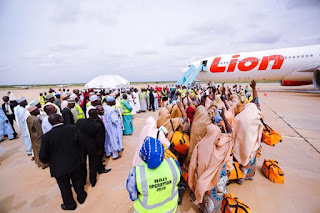 Muslim Women Association Ghana have revealed that the award winning Hajj Chairman, Sheikh I.C Quaye is one of the best Hajj Chairman the country has ever produced in the history of Hajj operation in Ghana.

The Association commended the government and the Hajj Board for their contributions towards the successful hajj Ghanaian pilgrims have witness in the past few years as well as make this year’s hajj fare cheaper and reasonable as compel to other Africa Countries.

According to them they are comfortable with the preparations by the Hajj Board, the Ghana Hajj Agents Association and the would-be pilgrims in ensuring a stress free hajj this year.

The Association stated the Sheikh I.C Quaye inherited a gargantuan doubt with about 500 leftover pilgrims from the previous hajj board which he was able to clear.

The debt the according to the Association compelled the Ministry of Hajj in Saudi Arabia to blacklist Ghana in performing hajj due to the huge amount of debt left behind by the previous administration but due to the intervention by Sheikh I.C Quaye and the government the debt was settled.

The Association further stated that despite the huge increments by the Saudi Arabia Authorities in charge of hajj affairs, Sheikh I.C Quaye and the government were able to arrived at 19,500 Ghana Cedis, which to them is reasonable.

They said due to a research conducted by the Ghana Hajj Research over the price the Association reiterated that Ghanaian pilgrims would be paying cheaper considering what others will pay in other countries.

They revealed that upon their research the amount should have been much higher than 19,500 Ghana Cedis adding that the Hajj board has been much considerate to Ghanaian Muslims.

According to the Association the current hajj board has encountered many challenges intense of taxations and new policies which led to the increments of this year’s hajj adding that transportation fare was increased by over 200%, accommodation, increased fare in Mina and Arafat fees as well as the introduction of VAT on all services.

This the Muslim Women Association Ghana called on all well -meaning Muslim and would-be pilgrims to accept the fare and continue paying to ensure a very successful hajj pilgrimage this year.