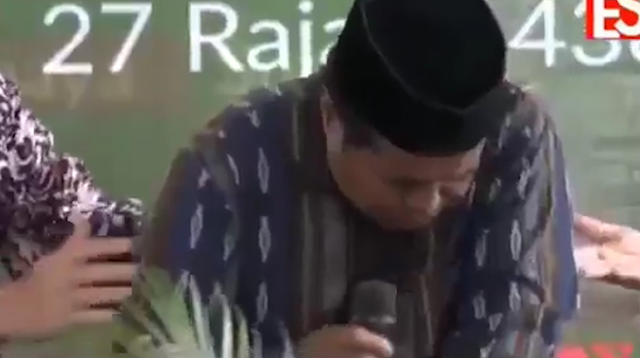 Sheikh Ja’far Abdulrahman while he was reading Quran
Sheikh Ja’far Abdulrahman, a revered Indonesian Quran reciter passed away while he was reading out verses during an official ceremony.
It’s believed Abdulrahman suffered a cardiac arrest during the reading.
Onlookers rushed to his assistance and he was quickly taken away on a stretcher.
He collapsed during verses from the sacred book’s Al-Mulk chapter.
He sadly died during the live on-air broadcast of the ceremony, which was being watched by the Indonesian Social Affairs Minister.
The clip has been circulated widely since Abdulrahman’s death, with many commentators on social media saying passing away while reading the Quran was an honourable way to die.
Daily Trust