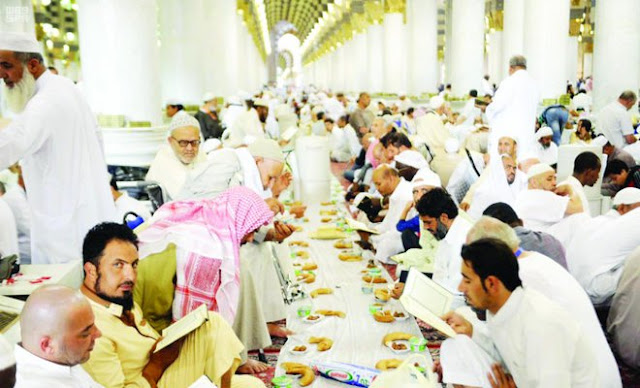 Ramadan tables are set up professionally in an oblong shape to take into consideration the entry and exit of worshipers. (SPA)
Ramadan tables in the Prophet’s Mosque and in its wide courtyards are a familiar scene to the people of Madinah before Maghreb prayer. It conveys brotherhood, cooperation and the desire to do good things, values the Saudi people were brought up on.

The people of Madinah compete to share their iftar with guests amid a spiritual atmosphere filled with faith in God.

Ramadan tables are set up professionally in an oblong shape to take into consideration the entry and exit of worshipers.

Tables inside the mosque are different from those outside in terms of food. Indoor tables contain dates, water, bread, coffee, tea, yogurt and nuts, while those outside offer cold meals, juices, rice, meat and chicken.

Despite the large number of meals on offer, the people responsible for them maintain hygienic practices, as well as an organized distribution and arrangement system.
The General Presidency of the Affairs of the Prophet’s Mosque helps provide a neat and organized service, said Abdulwahid Al-Hattab, deputy general supervisor of the Public Relations Directorate and chairman of the technical and service committee.
It also receives visitors around the clock, and provides prayer carpets and cold Zamzam water, he said, adding that the presidency formed committees to develop the system offered at the Prophet’s Mosque.

It follows up in terms of developing services and ensuring the satisfaction of visitors, worshipers and those fasting.

Various committees oversee meals, inner pathways, work in the old mosque, deal with violations in the courtyards and luggage, among other things.

Tables for those fasting are received half an hour after Al-Asr prayer ends, via gates allocated at the four corners of the mosque to allow the entry of dates, coffee, bread and yogurt, Al-Hattab said, adding that supervisors ensure no violations are committed and only allowed foods are admitted. Food is laid out in the mosque with the Maghreb Azan, and people break their fast before the Iqama.

The food is then quickly removed by workers, supervisors and those who brought it.
Outside the mosque, food is laid out in separate areas for men and women, with wide paths to allow the passing of pedestrians and carts allocated for services, he said. The whole area is then cleaned after people break their fast and before Isha and Taraweeh prayers.
ARAB NEWS