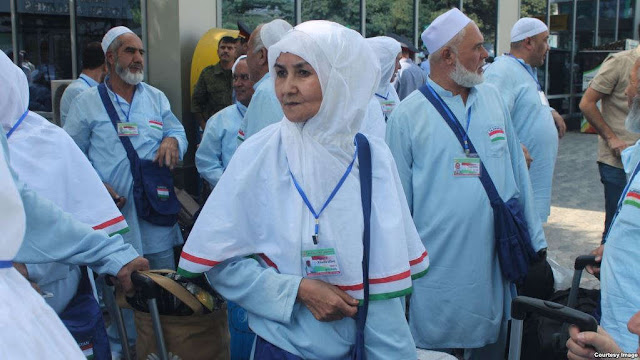 Tajik pilgrims flying to Saudi Arabia for the hajj in September 2014 at Dushanbe’s airport.
Authorities in Tajikistan have barred citizens under the age of 40 from performing this year’s annual hajj pilgrimage to Mecca.
Tajikistan’s Committee on Religious Affairs told RFE/RL on June 20 that the decision was made to give older Tajik Muslims more of a chance to undertake the pilgrimage, as Saudi authorities are putting in place stricter quotas.
But many in the Central Asian state believe the ban is an attempt to prevent instances of radicalization among younger generations.
In the past years, the Tajik government has routinely imposed age restrictions for devout Muslims to perform hajj. In 2015, the minimum age was 35.
President Emomali Rahmon’s government has repeatedly called for the strengthening of secular principles in the mostly Muslim country of 8.5 million.
Tajikistan has banned head scarves for schoolgirls, barred minors from mosques, and forced thousands of students to return home from Islamic schools abroad in recent years amid reports that many Tajiks have joined Islamic extremists in Iraq and Syria.
Radio Liberty Europe