Sheikh Sudais was appointed as Imam of Masjid Al Haram, Makkah by Royal Decree issued by the Late Custodian of the Two Holy Mosques King Fahad bin Abdulaziz in 1984/1404 at the age of 22 years.

Sheikh Sudais led his first Salah on 22 Sha’ban 1404 corresponding to May 1984. His First Salah in the Haram was the Asr Prayer.

There are no available recordings for his very first Salats, the earliest recording available is from after 2 months of his appointment below: 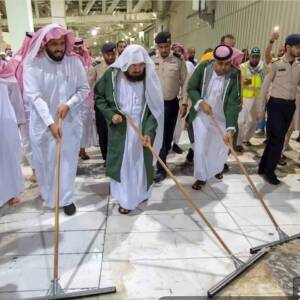 Since then, Sheikh Sudais became beloved by Muslims around the world for his Qir’ah.

Sheikh Sudais was appointed as Khateeb and then Chief Imam of Masjid Al Haram.

In 2012/1433, Sheikh Sudais was appointed the President of the General Presidency which oversees the Affairs of the Two Holy Mosques.

In 2020/1441, Sheikh Sudais also had the honor of completing the Quran during Ramadan for 30th consecutive year and delivering the completion of Quran Dua:

Hajj Reporters   The Assistant Undersecretary for Hajj and Umrah Servic…