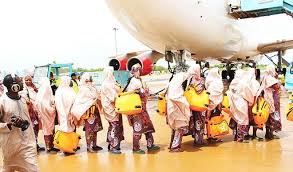 Sokoto state pilgrims boarding plane during hajj
The Sokoto State Pilgrims Welfare Agency (PWA), has so far remitted over N2.75 billion to the National Hajj Commission of Nigeria (NAHCON) the Agency’s Director-General, Alhaji Ibrahim Umar said on Wednesday.
Umar disclosed this in Sokoto when the Controller of the State Command of the Nigeria Immigration Service (NIS), Mr Habibu Haruna, paid him a courtesy visit.
Umar said:”The money remitted so far stood at fifty per cent payment for the 5,571 hajj seats allocated to the state for the forthcoming hajj.
”Sixteen out of the twenty Local Governments in the state had so far paid similar fifty per cent remittance to the agency, while six others were yet to do so.
”The management of the agency would soon meet and take decision on the defaulters, while they may have to forfeit their allocations for other Local Governments willing to pay for them.”
Umar commended Gov. Aminu Tambuwal for according top priority to all hajj related activities, attributing all the successes recorded by the agency to the gesture.
The director-general further described the NIS as a critical stakeholder in hajj affairs in the state and pledged to sustain the existing cordial relationship with the agency.
Haruna had earlier promised to do everything humanly possible to ensure the success of the 2017 hajj.
The controller also solicited for increased logistics support to the officers and men of the service handling hajj affairs.
In a related development, the agency distributed computers and accessories to the hajj registration officers in the 23 Local Government Areas of the state.
Umar stated at the ceremony that the computers would be used for the electronic registration of all prospective pilgrims.
”This is to capture their bio-metrics data, in compliance with a directive from NAHCON, and without such data, a prospective pilgrim would not be issued with a visa to enter Saudi Arabia,” he added.
The Commissioner for Local Governments, Alhaji Mannir Dan-Iya, represented by Alhaji Abubakar Dogon-Daji, Director, Monitoring and Inspection, said the electronic registration of intending pilgrims will help in creating a reliable and scientific database.
The State Chairman of the Association of Local Governments of Nigeria (ALGON), Alhaji Aminu Ibrahim, promised that generators and internet connectivity would be provided for the hajj registration offices across the state.
Daily Trust