Hajj 2021: Uncertainty and doubts continue to cast on the travel plans of thousands of Muslims who have registered with Haj Committee of India for Hajj 2021 as Saudi Arabia is yet to clarify the exact status of the annual pilgrimage to the Holy City of Makkah.

The Haj Committee of India (HCI) CEO Maqsood Ahmed Khan late on Thursday said the apex body overlooking the Hajj plans of Indian pilgrims is yet to receive official confirmation from Saudi Arabia.

“There is no official communication on the status of the Haj pilgrimage yet from the Saudi Arabian authorities so far and the entire process would be subject to their approval”, Khan said. 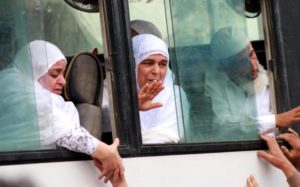 Hajj, the most important pilgrimage in a Muslim’s life, this year is tentatively falling on July 17. And at the time most of Muslims finalize their travel plan to Makkah, India is again witnessing a huge surge in new Coronavirus cases.

Following the fresh wave of the Pandemic, Saudi Arabia has extended the ban on international flights till May 17, 2021.

Last year in 2020, the Haj pilgrimage was out of bounds for the Muslim faithfuls from India, Pakistan and other parts of the world as it came during the surging peak of the Covid-19 pandemic in late-July, forcing the Saudi authorities to restrict the annual ritual only for 1000 selected Muslims who are residing in the Kingdom.

Nonetheless, following the latest directives from the Saudi Arabian Health Ministry and the Indian Consulate-General in Jeddah, Haj Committee of India CEO Maqsood Khan advised those who have applied for the Haj 2021 to take the first dose of the vaccine on their own now so they can be administered the second dose before departure.

“No Indian Muslims shall be allowed to go for the annual Haj pilgrimage unless they have taken the two vaccine doses”, he said.