Like any other nation with a Muslim population going on Hajj, the National Hajj Commission of Nigeria, NAHCON, is hopeful that foreign pilgrims will participate in Hajj 2022. Like many other individuals and nations, NAHCON is monitoring developments in the Kingdom of Saudi Arabia in relation to the said Hajj season. So far, recent activities in the Kingdom gives almost everyone optimism yet, based on past experiences, it is too early to jump for joy. The signals are not strong enough to enable NAHCON make decisive statements or to give definitive directives.

Thus, ordinarily, an annual Hajj calendar of events would have been released by the Commission by now as a guide towards preparations for the next year’s Hajj. However, with the uncertainties surrounding Hajj and Covid-19 constraints, developing a calendar of events presently has become a dilemma compared to past years. Firstly, no one can predict the new guidelines; policies that would shape the conduct of next Hajj talk little of setting a timeline to accomplish them.

By the way, Hajj calendars are tentative milestones for activities the Commission wishes to accomplish within a certain period before Hajj, during Hajj and after Hajj. For example, setting a date for when registration of pilgrims is expected to start and end, when pilgrims’ accommodation is expected to be ready, when selection of airlines for airlifting of pilgrims is expected to be completed, selection and orientation of pilgrims officials, when caterers will be selected, setting inaugural flight dates, pre-Hajj preparations and post return journey etc. Anyone would agree that the times are yet unripe for such a calendar of events. Until a Memorandum of Understanding (MoU) is signed with Saudi Arabia on 2022 Hajj, NAHCON cannot circulate a speculative Hajj calendar that might be misconstrued as a binding document. Especially with the reality of social media consequences. In fact, until the Kingdom of Saudi Arabia provides an insight on what shape the Hajj would take, every nation is still in the dark. And would be suicidal for NAHCON to release what it has.

Conversely, these uncertainties have not deterred the Commission from developing a tentative framework of action on Hajj preparations pending when the coast will be clear.

While waiting though, the Commission is test running some of its newly developed digital applications that would be launched when the fine-tuning is completed. Similarly, the Commission has been whetting the knowledge of its staff through variety of trainings, capacity building workshops etc. This is to keep its workforce abreast with modern operational techniques in various fields of human endeavor to meet up with challenges of the current period. At the right time, the Commission plans to dispatch a team of trainers to various states to sensitize them on the use of modern applications in the conduct of Hajj, and with a template on how best to organize pilgrimage under the influence of modern technology.

It is this writer’s believe that many states are not docile and some are already brainstorming on best strategies in managing pilgrims that are not technology savvies in this age of Covid-19 technological innovations. These patterns of enlightened brainstorming would ease the task of coordinating Hajj and Umrah operations within a short notice if it so happens.

However, it is heartwarming knowing that as at today, most states already have a list of registered Hajj hopefuls waiting to participate in the Hajj. Apart from that, some states are decisive on termination of registration of new pilgrims. And among all these anticipatory steps, Kogi state has made history as a pioneer in migrating all its registered pilgrims into the Hajj Savings Scheme.

This gives deposits of its pilgrims the added advantage of accumulating profit while waiting. This also means that by the time the #Hajj fare is determined, the Kogi state pilgrims would pay additionally lesser than non-Hajj Savings Scheme intending pilgrims might have to pay. 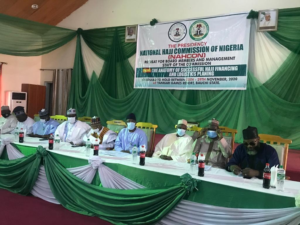 One of the moves the Commission has made in recent times is to persuade government to intervene in some of the charges that might accrue on pilgrims as a result ofCovid-19 test protocols. This is with a view of alleviating the extra burden that might be placed on the pilgrims.

Therefore, the Commission would continue to work with all stakeholders for the common interest of Nigerian Muslim intending pilgrims to Makkah.