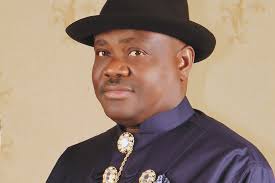 His Excellency Nyesom Wike, Rivers State Governor
Hajj Reporters
Independent Hajj Reporters urged Riverss State Governor Nyesom Wike to reconstitute the state Muslim Pilgrims Welfare Board to enable it prepare for this year’s hajj.
Since the dissolution of the pilgrims board in January, activities geared towards the preparation for 2017 hajj have been in hibernation, a statement by the civil society’s national coordinator, Ibrahim Muhammed and publicity Secretary, Abubakar Mahmoud, said.
“In view of the above, we urge Governor of Rivers state, Nyesom Wike to reconstitute the Rivers State Muslim Pilgrims Welfare Board,” the statement said.
The civil society which monitors and reports hajj activities in Nigeria and Saudi Arabia said “it is important to note that the preparation for 2017 hajj has reached its peak, with virtually every states pilgrims’ boards performing one task or the other.”
Independent Hajj Reporters said “we are worried that lack of a constituted body to embark on preparation for 2017 hajj in Rivers state will have a negative impact on the state pilgrims when the operation eventually commences.”
It however acknowledged Governor Wike’s contribution to the welfare of Rivers State Pilgrims during the 2016 hajj.”
“Despite the economic downturn in the country, Rivers State is among the few states that sponsor people to 2016 hajj and made provision for their welfare. Such efforts especially from a state with few numbers of Muslims are commendable, as it will further deepen inter-faith unity in the state,” the civil society said.