Iranian authorities say pilgrims may be able to resume visits to Saudi Arabia for performing umrah rituals after a five-year ban and amid reports that Saudi Arabia has agreed to guarantee the safety and dignity of the Iranian travelers.

A Wednesday report by the semi-official ISNA news agency said that Iran and #Saudi Arabia have been discussing the issue to allow a resumption of #umrah pilgrims by #Iranians to the holy sites in the Arab country.

Figures by #Iran’s Hajj and Pilgrimage Organization show that some 5.8 million people are on a waiting list for travelling to Saudi Arabia to perform umrah, a pilgrimage to Islam’s two holiest sites in Saudi Arabia’s Mecca and Medina which can be undertaken at any time of year. 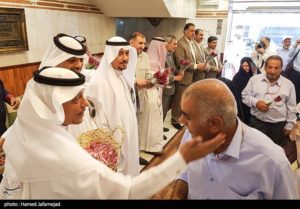 #Umrah differs from #Hajj in that the latter is a lengthier visit which is done once a year and performed once in a lifetime by able-bodied Muslims who can afford it.

Iran stopped sending umrah pilgrims to Saudi Arabia after two Iranian teenage boys were harassed in an airport in the Saudi city of Jeddah in March 2015.

That came nearly a year before the two countries cut their diplomatic relations over incidents affecting Saudi missions in two Iranian cities of Tehran and Mashhad.

However, a senior official in Iran’s Hajj organization said that umrah trips by Iranians could resume if Saudi Arabia gives assurances about the safety of the Iranian pilgrims.

Akbar Rezayi, who serves as the deputy head of the organization, said that the host country has given “a positive message” about the presence of Iranian pilgrims in #umrah this year amid ongoing talks on the issue between authorities of the two countries.

He saidt that the Saudi government had announced plans for hosting Muslims for umrah pilgrimage after holding a limited hajj ceremony earlier this month.

Only 60,000 pilgrims from Saudi Arabia were allowed to participate in hajj ceremony this year as the kingdom barred foreign visitors for a second year running to minimize the risk of coronavirus infections.

By Imam Murtadha Gusau   In the Name of Allah, the Most Merciful, the Most Com…