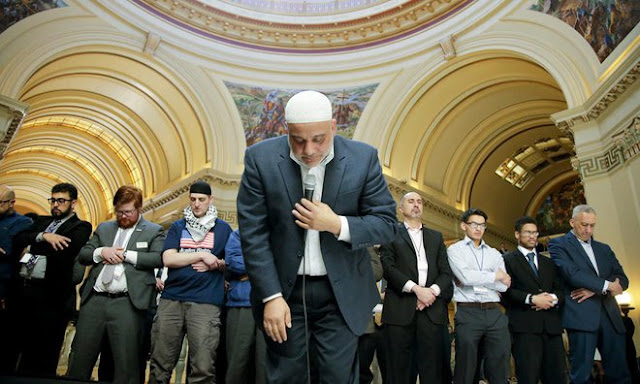 Imad Enchassi, center, leads a group of Muslims gathered at the Oklahoma State Capitol in prayer in Oklahoma City on March 2, 2017. (Jessie Wardarski/Tulsa World via AP)
Setup Timeout Error: Setup took longer than 30 seconds to Arab News | Published — Sunday 5 March 2017
omplete.
An American lawmaker known for anti-Islam remarks is requiring Muslims to answer several written questions — including, “Do you beat your wife?” — before agreeing to meet with them.

The office of Rep. John Bennett, a Republican from the state of Oklahoma, distributed the questionnaire on Thursday as the Oklahoma chapter of the Council on American-Islamic Relations (CAIR) organized its annual Muslim Day at the Capitol. The lawmaker’s office gave the list of questions to three Islamic school students who came to his office and asked to speak with him.

The questions asked Muslims whether they would denounce terror groups such as Hamas and Hezbollah and whether they believed former Muslims should be punished for leaving Islam. One question asked Muslims if they agreed that Islamic law, known as Sharia, should rule over non-Muslims.

The questionnaire drew a swift rebuke from civil rights groups and Oklahoma’s CAIR chapter, which represents about 40,000 Oklahoma residents who are Muslims.
“Nobody should be vetted with stupid, Islamophobic, hateful, bigoted questions before they can meet with their representative,” said Adam Soltani, the executive director of CAIR-Oklahoma.
Bennett did not return a message seeking comment on the questionnaire Saturday.

The lawmaker has previously referred to Islam as “a cancer in our nation that needs to be cut out.” At an interim study Bennett convened in October to study the religion, he suggested that CAIR and a local imam were terrorists.
Recently, Bennett came under fire when he posted a news story on Facebook critical of Democratic presidential candidate Hillary Clinton and added the comment, “2 words … firing squad.”

“It’s frustrating that Representative Bennett keeps pressing the issue in the way he does,” said Anna Facci, the government affairs director for CAIR-OK. “It certainly is frustrating but it’s not surprising.”
Hajj News

Comments Off on US lawmaker asks Muslims: “Do you beat your wife?”

As part of measures to ensure equitable distribution of Hajj seats to pilgrims, Ind…