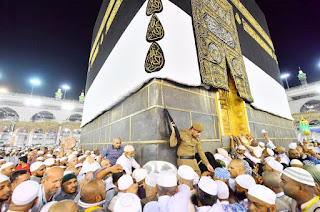 Moroccans who were on the hajj waiting list and are replacing those who won the first lottery but did not pay on time, should pay for hajj in the next two weeks.
Rabat – The Moroccans who recently got off the waiting list and onto the selected list to perform Hajj in 2019 must pay their hajj pilgrimage fees on March 25 or 26at Al Barid Bank agencies across the country, the Moroccan Ministry of Islamic Affairs has announced.
After some potential pilgrims won the hajj lottery in its first phase failed to pay the fees between February 18 and March 1, the ministry replaced awarded their places to Moroccans on the waiting list. This second phase of selected pilgrims must now pay the fees or be bumped off the list as well.
The cost of the Hajj is set at MAD 49,906, but does not include pilgrims’ pocket money. The ministry usually encourages Moroccans to carry MAD 15,000 for personal expenses.
The hajj fees cover pilgrims’ airplane tickets, food, accommodation in Medina and Mecca, transportation within Saudi Arabia, luggage fees, vaccinations, and the 5 percent tax Saudi Arabia imposes.
To avoid a repeat of last year’s discomfort which Moroccan pilgrims suffered on hajj, the Islamic affairs minister, Ahmed Taoufiq, visited Mecca in December to discuss preparations for the 2019 hajj season.
The minister met with heads of delegations to prepare to provide the best services to allow pilgrims to perform their rituals in comfort.
The 2018 hajj season did not go smoothly for Moroccans. Many, including elderly people, struggled in Mecca due to lack of management, transport, shelter, and healthy meals.
Several Moroccans also said that they had missed major hajj rituals, such as the “stoning of the devil,” because there were “no delegates or coordinators” to guide them.
MORROCO WORLDNEWS