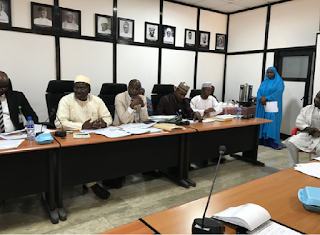 Members of the panel in a sitting today at NAHCON office
Hajj Reporters
Sequel to an advertorial by the National Hajj Commission of Nigeria, NAHCON, in November of 2018, calling for renewal or fresh application for licencing as private Tour Operators, about 144 companies sent applications. Out of this number, 59 were confirmed while 85 were considered not qualified.
A statement signed by, Fatima Sanda Usara Head of Public Affairs Division
Of NAHCON said that “those considered not qualified were given an opportunity to present their cases before a panel constituted by the Commission to listen to their defences.Towards this, a 10-man committee named “Consideration of Appeals By Appellant Companies for 2019 Hajj License”was constituted. In his remarks yesterday, 25thMarch 2019, during commencement of hearing, NAHCON’s Commissioner Operations, AlhajiModibboSaleh, charged the members on fairness in the discharge of their assignment and to conduct the sitting bearing in mind consequences of injustice. He propelled them towards maintaining those standards enshrined by NAHCON as borderline of doing business in the interest of pilgrims. Finally, he prayed the Almighty to guide them in their mandate.
NAHCON’s Deputy Director Audit, Alhaji Muhammad HammaJoda, chaired the Committee. Other members include, Head, Tour Operators; Head, Inspectorate and Compliance, Assistant Director, Legal Department; Head of Licencing Division; Head, Human Trafficking; Security Liaison Office, Legal Officers and representative of Association of Hajj and Umrah Operators in Nigeria, (AHUON),
Some of the companies penalised failed to comply with the registration guidelines among which are presentation of tax clearance, failure to return their registered pilgrims on time as required by Saudi Arabian and Nigerian extant laws, failure in remittance of caution fees, and other offences. The Committee is expected to submit its report within the week.