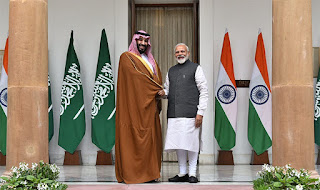 India was initially allocated based on population of Muslims in the country a Haj quota of around 1.70 lakh

New Delhi: Saudi Arabia on Wednesday increased Haj Quota of India by 25,000. The Indian Haj quota was earlier 175,025. It has now been increased to 02 lakh, Haj Commitee of India CEO Dr Maqsood Khan said.
The decision to increase India’s Haj quota was taken during a bi-lateral meeting between Prime Minister Narendra Mod and Saudi Crown Prince Mohammed bin Salman at Hyderabad House in New Delhi Wednesday, he said while talking to ummid.com.
“I express my deepest thanks to Saudi Crown Prince Mohammed bin Salman for increasing India’s Haj quota.
With the latest increase, the Indian Haj quota is now more than that of Pakistan.
Haj Committee of India CEO further said that the revised Haj quota will be applicable from 2019 itself. He also said that 30% of the 25,000 additional seats will be given to Private Tour Operators and remaining 70% seats will be given to pilgrims who had applied to Haj Committee of India.
“Pilgrims from the Haj 2019 waiting list will be given preference”, he said.
He also said that a final decision will be taken after the complete details are available.
“It also depends on how the Haj pilgrims will be given accommodation during Haj – inside Mina or outside. However, it’s a good thing that the Saudi government has increased the Indian Haj quota”, he said.
Minister of Minority Affairs Mukhtar Abbas Naqvi had earlier requested Saudi Arabia to increase by 20,000 its quota of pilgrims for the Hajj of 2019. Naqvi made the request in Saudi Arabia when he was in Jeddah to sign Haj 2019 deal with the Kingdom’s Haj ministry.
India was initially allocated based on population of Muslims in the country a Haj quota of around 1.70 lakh by Saudi Government. In 2018 however 175,025 pilgrims performed haj as the Saudi government accepting similar requests by the Modi government had increased India’s quota by 5,025.
More than 300,000 aspiring pilgrims applied for the next Hajj and the deadline for submission of applications has extended by another week to December 19, following requests from Haj committees in some states.
ummid.com News Network