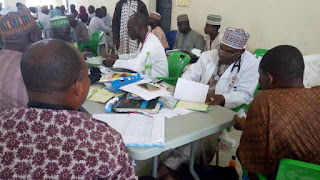 Hajj Reporters
The Chairman of National Hajj Commission of Nigeria (NAHCON), Barrister Abdullahi Mukhtar Muhammad, today 21st March 2019, inaugurated the Medical Guidelines Review Committee for 2019 Hajj. The inauguration, which took place in the Commission’s conference room, has members drawn from Federal Ministry of Health, State Pilgrims’ Welfare Boards (SPWB) and staff of NAHCON.
A statement signed by Fatima Sanda Usara
The head of NAHCON Public Affairs Division,
Said that the “The Committee is expected to review existing medical operation’s guidelines due to dynamism of Hajj operations that necessitates constant appraisal and re-strategizing.
It is also expected to make recommendations on how to improve on successes so far recorded.
Among others, the review will focus on:
·     Medical team recruitment procedure and composition;
·     Recommending minimum and maximum duration of engagement of medical personnel in 2019 Hajj operation;
·     Recommending reasonable remuneration for medical personnel, taking financial capabilities of individual states into cognizance;
·     Identifying and reviewing performance of medical personnel in 2018 Hajj in order to propose methods of improving;
·     Proposing a budget for drugs, medical consumables and ratio of funding by state’s and NAHCON;
·     Educating medical team members on terms and conditions of engagement and the need to abide by them once they become signatories to these.
In his speech, the NAHCON Chairman thanked the members for accepting to serve in the committee despite the short notice. He harped on the relevance in composition of  members of the Committee, which reflects consultative nature of the Commission.
In response, Chairman of the committee, Dr Ibrahim Kana, thanked NAHCON’s Chief Executive Officer for the confidence reposed on them to carry out the assignment faithfully,judiciously andsoonest too. He promised that the Committee would present its report within the shortest time possible.
Other members of the committee apart are: the Executive Secretary, Adamawa SPWB; General Overseer, Kaduna SPWB; Director, FCT SPWB, representative of Kano State SPWB; Borno state Executive Chairman of SPWB, NAHCON’s Deputy Director Account, Deputy Director Audit, Deputy Director Administration and Human Resources, Head of Planning Division and Dr, Jibrin Suleiman of Federal Ministry of Health, Abuja.
The Committee is expected to submit its report within one week of inauguration.