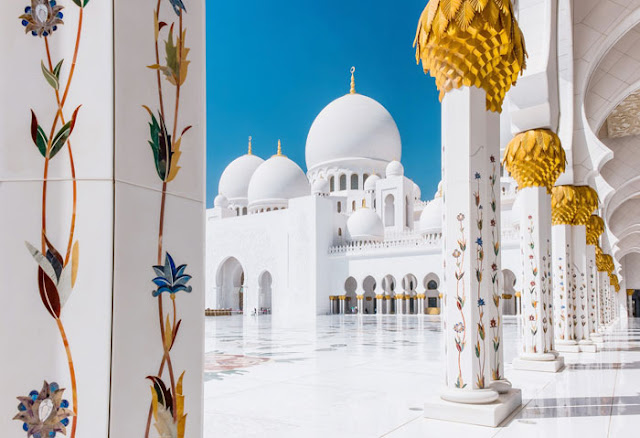 A MAJOR exhibition on the Haj, the annual pilgrimage to Makkah that every Muslim must make, is due to open in Abu Dhabi this September, focusing on the challenges faced by Emirati pilgrims who make their way to Islam’s holiest site. The show, titled Haj: Memories of a Journey (opens Sept. 20), will be held in the grounds of the Sheikh Zayed Grand Mosque.
The Abu Dhabi Tourism and Culture Authority is backing the exhibition. Its spokeswoman says: “The exhibition’s curatorial view on the sacred pilgrimage is through the lens of Sheikh Zayed’s personal Haj in 1979.” The late Sheikh Zayed Bin Sultan Al-Nahyan, considered the founding father of the United Arab Emirates, undertook the Haj wearing the simple white robes worn by pilgrims.
Telling the story and history of Makkah, and the rituals of Haj, as one of the five fundamental pillars and practices in Islam, the exhibition will bring to life the profound significance of the sacred practices, while also underlining the evident attributes of tolerance, equality and the vast diversity to be found in Islam.
Sheikh Zayed Grand Mosque, one of the most prominent and leading landmarks of culture and intellectual exchange in the UAE and is visited by five million people annually.
Objects will be drawn from major public and private collections in both the UAE and abroad. “It will begin with an exploration of the historical progression of the arrival and adoption of Islam in Arabia and evidence of the earliest centuries of Islamic practice, through key studies and archeological sites in the United Arab Emirates,” the organizers say. Oral histories, early photographs and archival materials reflect the experiences of Emirati pilgrims on the Haj, while a range of Kiswah— the cloth that covers the Holy Kaaba—dating from different periods, will also be shown.
Through a showcase of artefacts, historic photographs, multi-media displays and commissioned contemporary installations, ‘Haj: Memories of a Journey’ will unfold a rich and engaging narrative charting the history and cultural context for this spiritual pilgrimage.
It will also offer a number of public programs and educational workshops inspired by the exhibition’s concept and message.
Historical artefacts
Ahmed Juma Al Zaabi, deputy minister of presidential affairs and board chairman of the Sheikh Zayed Grand Mosque Center (SZGMC), said: “By displaying historical artefacts and important documentation, the SZGMC aims to underline the noble values that relay the significance of the journey of Haj, and to convey a comprehensive image of this journey from the time Islam first evolved in the Arabian Peninsula to date. The center clearly expresses the profound place it holds in the life of each and every Muslim in the UAE and in the entire world.”
Mohamed Khalifa Al-Mubarak, chairman of Abu Dhabi Tourism and Culture Authority, stated, “Millions of Muslims descend on Makkah every year from all around the world to take part in rituals that bring them together in humility and unity, while reviving some of the deepest Islamic and cultural connotations. The significance of the ‘Haj: Memories of a Journey’ exhibition stems from these qualities of solidarity and the wide cultural dialogue, fostered by the fifth pillar of Islam.”
“The exhibition will highlight the immense influence Haj had on numerous cultures, united by faith throughout the centuries. It will also feature objects ranging from historical artefacts to contemporary artworks, some never before exhibited,” he added.
The exhibition offers the public an opportunity to glance into the historical data and documents, and recounts the story of the early spread of Islam at various historical sites in the Arabian Peninsula.
The exhibition will also refer to various verses and texts from the Qur’an as well as the five pillars of Islam, which are concluded by Haj and its sacred rituals.
The show follows a critically acclaimed exhibition on the Haj held at the British Museum, London, in 2012 (Haj: Journey to the Heart of Islam). A spokeswoman for the British Museum says that the new exhibition was inspired by the London show.
The General Authority for Statistics department in Saudi Arabia reported that last year that the Haj received 1.9 million pilgrims, with 1.3 million pilgrims coming from abroad. — Agencies
Saudi Gazette
Opinion

By  Waleed Basyouni (Ph.D) Vice-President AlMaghrib Institute   In the Hajj of…