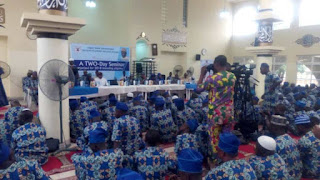 Hajj Reporters
The intending pilgrims from Lagos state have been urged to complete their hajj fare on or before April 15th to enable the State Board make necessary arrangement to the facilitate their participation in the 2019 Hajj exercise.
This appeal was made yesterday by the Board Secretary, Mr. Ishola Rahmanin his office while addressing the appointed Coordinators for the different local governments at the Old Secretariat, GRA, Ikeja.
This was contained in a statement signed by the Public relations officer of Lagos State Muslim Pilgrims Welfare Board, Jamiu Dosunmu
Mr. Ishola said the appeal became necessary to aid the smooth operation of this year hajj operation and to pave way for early payments for a standard accommodation, quality tent in Mina and other necessary needs in Saudi Arabia.
The Board Secretary observed that late payment have been identified as the major cause of hitches at the holy land in previous hajj operations.
He also hinted that Lagos State Muslim Pilgrims Welfare Board is fully ready for biometric capturing but awaits the directive of the National Hajj Commission of Nigeria (NAHCON) to announce the date, after having completed arrangement for the exercise.
Mr. Ishola also call on intending pilgrims to be fully prepared for the usual weekend lectures, which  is designed to equip them with the basicIslamic knowledge and skills requiredto perform hajj in the kingdom of Saudi Arabia as it will start soon at the various local government secretariats across the state.
Meanwhile, Sales and submission of forms is ongoing at the Board while intending pilgrims’ medical test is also on at the Lagos State University Teaching Hospital.